[BEEP] Hi, this is Ned. I’m out of the blog-o-sphere today and probably curled up with an empty carton of egg nog and a pile of Almond Roca wrappers. But if you’ll leave your name, blog and a brief message, I’ll get back to you as soon as I can think coherently which, coincidentally, is one if my New Year’s resolutions! Happy Holidays! [BEEP]… 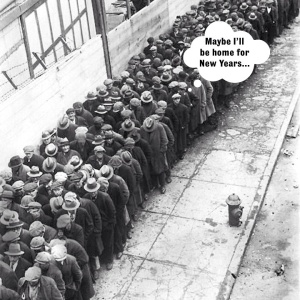 It was many Christmases ago when I found myself standing in line with approximately 800 other husbands (conservative estimate) who, like me, had been sent to return the Christmas gift they had gotten their wives.

I should probably point out that I’m not still waiting in that line and have since re-married. I don’t think that is a coincidence.

However, I can distinctly remember the experience for a number of reasons. First, because it’s rare to see so many men standing in line for something that isn’t leading to a sporting event, urinal or more beer.

Not necessarily in that order.

Secondly, I remember it because the loudspeaker, which was positioned directly over my head, played the same Christmas song 16 times. This was over the course of an hour, by the end of which I was making up lyrics I can’t print here.

What I can tell you is that my son will never, EVER be allowed to have a drum.

The main reason I remember this so well is due to sheer coincidence, i.e., coincidently, every man standing in line with me was returning an Epilady Shaver. Each conversation with the customer service person went something like this:

“Can I help you?”
“I’d like to return this.”
“Is there something wrong with it?”
“Yes, my wife can’t use it without throwing it at me.”
“It looks like it’s been damaged. Is this the way it came?”
“No, that happened when it landed in the driveway. My wife has a good arm but not much aim.”
(Uncomfortable pause.)
“I’m serious. She chased me. Naked. I don’t think I’d be alive if she hadn’t slipped on the linoleum. I’m just glad the dog was there to break her fall.”
“Sir, unfortunately I can’t give you a refund because of the damage. All I can do is give you a store credit, which you can use to get her something else.”
“…oh God…”

This is the typical male reaction when it comes to gift buying for their wives, particularly in this case, when the stakes have been raised exponentially by the “make-up gift” factor. For example, let’s say a man gives his wife a robe that is too big. Exponentially speaking, we’re talking about a factor of one because, in spite of the sizing error, his wife had been made to feel petite. Therefore, he can simply exchange the robe for a smaller one. Looking at the opposite end of the spectrum, let’s say the robe in question is too small. Exponentially speaking, we’re talking about a factor of 50, which is the number of times he will be rat-tail whipped with his wife’s robe before she has exhausted herself enough for him to yank it away.

As I stood in line that day, it was obvious that every man was attempting to calculate the exponential “make-up” factor for a gift that had come from the heart and left through the bathroom window. It was also obvious that most of us had forgotten every mathematical equation we’d learned since the seventh grade, which could explain why several men broke from the line and disappeared into the business supply section.

I, however, was not one of those men.

I’d like to say it was because I managed to calculate the “make-up” factor in my head and, through my mathematical prowess, determined the exponential number to be…

But, no. The reason I didn’t race for a calculating device is because, by that time, my brain had been lulled into submission by a drum-beat pattern. When I got to the customer service counter, our conversation went something like this:

So men, as you return that special gift this week, remember the “make-up” factor and exchange your wife’s gift accordingly.

It probably wouldn’t hurt to bring a calculator.

29 thoughts on “If at first you don’t succeed, I’ll meet you in customer service”