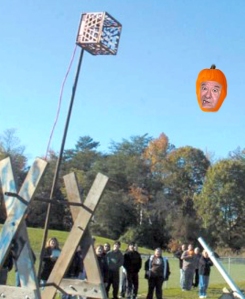 This weekend, watch for falling pumpkins.

I left the house this morning and made an important realization: What I had assumed was a fleece-lined, bright orange sweatshirt laying crumpled on the front steps was actually NOT a garment at all.

It was our jack-o-lantern.

This realization was made while attempting to pick it up. Though my intention was to give my children a stern lecture on taking care of their clothing, I decided instead to scream uncontrollably after grabbing a handful of pumpkin mucus. Somehow, our pumpkin’s aging process had accelerated, causing it to collapse in on itself and sprout white fur — literally — overnight.

This isn’t an isolated incident. Anyone who hasn’t disposed of their jack-o-lantern by now has witnessed this process, which we can all agree defies the natural laws of physics. One morning, your pumpkin’s face is triangle-eyed and gap-toothed as normal. The next morning, it is Buddy Hackett.

Should the process be allowed to continue, there’s a chance your pumpkin will actually collapse so far in on itself it will create its own gravitational pull and eventually threaten the space-time continuum. To avoid a cataclysmic event ushering in the return of bell-bottom pants, you have a responsibility to the rest of us to dispose of your gourd immediately, even if it means scraping it up with a shovel and transporting it to a government facility.

However, for those of you who remember to dispose of your pumpkin before it contains enough organic matter to become self-aware, you have another option, which is to drive to Milton, Delaware for the annual “Punkin Chunkin World Championships.” There, you will find the kind of excitement one can only get from jettisoning a large gourd as far as possible without the aid of rocket fuel.

The annual event, which has taken place each year since 1986, got started the way a lot of sporting competitions do: by having two men argue over who can throw something the farthest.

In this case, an anvil.

Fortunately, fate (most likely, in the form of a pulled groin muscle) intervened, and Punkin Chunkin was born. In a nutshell, participants use catapults, air cannons and oversized slingshots to hurl large pumpkins over great distances. Last year, Bruce Bradford’s winning toss set a new world’s record but, tragically, took the life of an Amish man during a barn raising in nearby Pennsylvania.

The good news is, Punkin Chunkin is catching on across the U.S.
Soon, you may not have to drive as far as Delaware to chunk your pumpkin! The bad news is, because of growing popularity, you could, at this very moment, be standing in a Punkin Chunkin drop zone. This is similar to standing in a golf course drop zone, except, in this case, no one will be yelling “FORE!” before you get hammered with a 10-pound gourd traveling in excess of 60 mph.

Just to be safe, I would avoid going outside until the competition officially ends this weekend. Assuming, of course, there isn’t a sudden shift in the space-time continuum.

In the event that happens and I find myself wearing checkered bell-bottoms, I ask that you please direct me to the nearest Punkin Chunkin drop zone.

(You can write to Ned Hickson at nhickson@thesiuslawnews.com, or at the Siuslaw News at P.O. Box 10, Florence, OR 97439.)

8 thoughts on “Your decomposing pumpkin could threaten mankind”