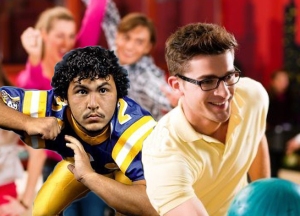 Full-contact bowling could add a whole new meaning to the agony of defeat.

Like millions of other red-blooded, unathletic men across America, I will spend a good portion of New Year’s Day sitting on the couch, eating handfuls of assorted snack foods, and whining every time a player from my team makes even the teeniest mistake.

The reason these things don’t matter to us men is because we knew THOSE men can’t actually hear us. If they could, then football parties as we know them would cease to exist: END_OF_DOCUMENT_TOKEN_TO_BE_REPLACED

For those of you who made fun of me for over-reacting to a nightmare I had about my daughter’s first date (Click here), I offer this headline in support of my decision to not allow either of my daughters to date until they are 30…

Speed up your workouts by avoiding eye contact with anyone in better shape than you.

Like millions of Americans, I recently stripped down, prepared myself for the worst, and stepped onto the scale. Soon after, I retrieved the scale from the front yard and accepted the fact that, yes — it probably was defective. At my daughter’s suggestion, I tried our neighbor’s scale. This led to the discovery that, of the 23 scales I tested within a five-mile radius of our home, every single one was off by exactly seven pounds. Being a journalist, I had to wonder: Was this a widespread problem? Were we being duped into needless exercise by faulty scales?!

I immediately brought this to the attention of my editor, who, realizing the implications, told me to stay out of her candy drawer.

The truth is, I have no one but myself to blame for putting on these extra pounds. This is why, every year around this time, people just like me make a commitment to start going to the gym. I know this because I recognize most of these people from last year. We all have the same expression: grim determination mixed with a sense of purpose in knowing that, afterward, there’s a KFC right across the street. We come dressed with headbands and towels over our shoulders even though we spend most of our time wandering around the gym looking for water bottles. END_OF_DOCUMENT_TOKEN_TO_BE_REPLACED

Yet another reason why fire engines are painted red.

Behind every great news story is a paper trail.

There are few things that can bring a newspaper to a halt when it is facing a deadline. In fact, aside from a natural catastrophe or a critically important breaking news story (Example: Anything related to Dancing with the Stars), nothing stands in the way of our commitment, as journalists, to ensure that the power of the press continues — unless, of course, the unthinkable happens, and we run out of toilet paper in both employee restrooms.

As professionals, this is a scenario we train for. We know how to recognize a potential “situation” that could leave us vulnerable and without back-up. Yet, as we learned today, all it takes is a momentary lapse in resoluteness for things to escalate into a full-blown crisis.

“Has anyone seen Bill?” (Note: The names in this dramatic re-enactment have been changed to protect the innocent, such as myself, from being physically assaulted by “Bill.”) END_OF_DOCUMENT_TOKEN_TO_BE_REPLACED

Last-minute shopping can be dangerous, especially if there’s a sale.

As is our tradition, my wife and I made an excellent plan to get our gift wrapping done so that, on Christmas eve, we could bask in our accomplishment while drinking warm, spiked beverages and gazing introspectively at the twinkling Christmas tree lights, until we pass out.

And, as is our tradition, we once again found ourselves locked in the bedroom with rolls of ribbon and wrapping paper strung across the bed, passing the scissors and tape back and forth like a frantic game of “hot potato.”
As expected, our bedroom quickly resembled a CSI Christmas crime scene in which the holiday spirit had exploded… END_OF_DOCUMENT_TOKEN_TO_BE_REPLACED 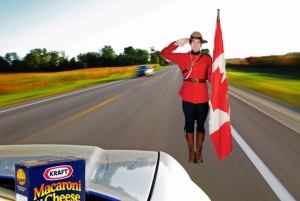 Since the speed limit is 120 mph in Canada, sneaking Kraft Mac & Cheese into Alberta should be a breeze.

Today we will be talking about Canada.

Because aside from the many similarities we share with Canadians, such as celebrating our independence day the very same weekend, and our historic bi-lateral agreement banning any future above-ground testing of Nadya Suleman’s reproductive system, I have been offered an official Canadian citizenship starting at 12 a.m. on Jan. 1.

OK, so my citizenship will only last 24 hours.

Possibly less, depending on how I pronounce the word “Poutine” (which, from what I understand, is a French word meaning “clogged artery”). However, if all goes well, I will get to spend an entire day as a real Canadian, eating nothing but Tim Horton’s Donuts, chewing purple gum that tastes like soap, and stretching my Molson muscle (which I swear only sounds inappropriate for a family newspaper.) END_OF_DOCUMENT_TOKEN_TO_BE_REPLACED

Don’t let your dislike of fruitcake become a disorder.

Recent studies show that mild depression after the holidays is not only common but, in many cases, is the result of FDAD — Fruitcake Disposal Anxiety Disorder. On one hand, your fruitcake was a gift and therefore deserving of some measure of appreciation. On the other hand, it has already become a chew toy for the neighbor’s pit bull. This often leads to feelings of anxiety long after the holidays have ended, particularly when you see “Buster,” still intoxicated with rum, struggling to dislodge the sugar loaf from his tightly-clenched jaws.

I’m OK—You’re OK. But Give Me a Fruitcake and I’ll Kill You. END_OF_DOCUMENT_TOKEN_TO_BE_REPLACED

Maybe even Santa is feeling stressed by the fiscal cliff?

Warning: This column contains gift ideas of an explicitly stupid nature and may not be suitable for some readers. Particularly anyone who might actually consider buying one of these items for a friend or loved one.

That’s right! It’s time once again for our annual holiday feature: Gifts That Say Santa is Getting Senile.

As always, we spared no expense when it came to assembling a team of journalists with the talent necessary for this assignment. And, as always, we wasted those talents by spending our entire operating budget of $32 on lottery Scratch-Its. As a result, our plan to provide you with exciting Christmas gift ideas quickly deteriorated into this list of stupid products that, if given as gifts, will surely lead to more than one hospitalization this holiday.

The world of fruitcake lovers is a dangerous one for those without a spare.

Every once in a while a column strikes a nerve with readers. These readers then write me to express their displeasure; they are angry, hurt, offended, or breaking in new stationery. Whatever the reason, I appreciate this feedback regardless of the fact that, in many cases, the column they’re talking about wasn’t mine. So you can imagine my shock at getting unhappy letters from people who (a) read my column and (b) actually like fruitcake.

The letters came in response to the column I wrote about Fruitcake Disposal Anxiety Disorder, which was named in a New York Post special investigation as “The fastest-growing mental disorder in the entire world.”

“And we’re pretty sure about that,” the report concluded. “If not, then it’s right up there with ‘Fear of Clowns’ or something.”

After receiving these letters, I looked back over the column and realized that, yes — it was a little insensitive to fruitcake lovers out there. So, in response, I spent time looking into what makes a good fruitcake, compared with the kind of fruitcake the rest of us receive each holiday season. After comparing dozens of recipes and then baking four different fruitcakes of my own, I realized something important — which is that, by using a six-inch bundt pan, my daughter now has a full set of tires for her Barbie Jeep. END_OF_DOCUMENT_TOKEN_TO_BE_REPLACED