This week’s topic: Painted nails that will make you cuddle your cuticles for comfort… 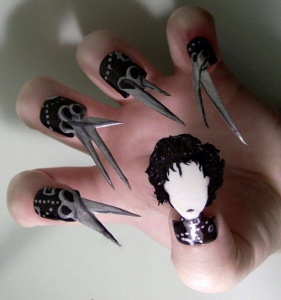 BrainRants: I approve of this because Edward Scissorhands is creepy, and creepy shit is awesome.

Omawarisan: How do you use toilet paper if you’ve got Edward Scissornails?

Jack: It’s all fun and games until someone loses an eye – because you went to brush your hair out of your face and you have 9 minature scissors on your fingertips.

Ned: Edward Scissorhands or not, it seems to me these nails would make it hard to trim your bush.

(In the mood for a One Direction manicure yet? No? See how you feel after seeing these next examples at Long Awkward Pause…) 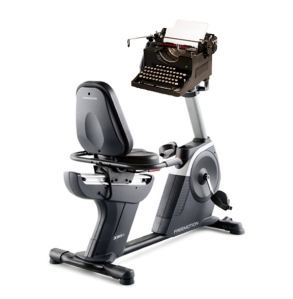 In a way, establishing a writing routine is a lot like going to the gym. Except that you don’t get sweaty, never leave a seated position and, unless you write romance or erotica, you probably won’t increase your heart rate much.

END_OF_DOCUMENT_TOKEN_TO_BE_REPLACED

By saying things like, “Hey Honey! Look at that wooden lion over there!” END_OF_DOCUMENT_TOKEN_TO_BE_REPLACED 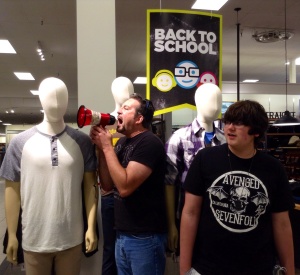 My son really hates it when I call for a price check.

Everyone with teenagers please raise your free hand. And by “free” hand, I mean whichever hand isn’t either guarding your wallet or refrigerator door. For parents without a free hand because you are guarding both, don’t worry; we can see it in your eyes. It’s that blank, pleading stare recognized and shared by all parents with teenagers.

It’s a look that says, If not for over-the-counter medication and America’s Got Talent, I would curl into a fetal position until my kids turn 20.

Part of what makes raising teens so challenging, aside from mood swings that would frighten both Dr. Jekyll and Mr. Hyde, is the lengths parents will go to avoid doing things their teen views as “totally embarrassing,” such as breathing while in the presence of someone they might know from school. Or making eye contact with them anywhere outside of the home. Or referring to them as “Pookie” or “Scooter” while standing in line with other parents and teens during school registration. (Read more at Long Awkward Pause…)

It’s Saturday, which means it’s time for The Saturday Six, when I and the rest of the staff at Long Awkward Pause comment on six items that are related and completely awkward — think of six Jimmy Osmonds at an Osmond Family reunion and you’ll have a good idea of what I’m getting at. This week’s subject? Fake celebrity make-overs. Fortunately, there’s no Jimmy Osmond in sight…

1. Between A Rock And A Kitty 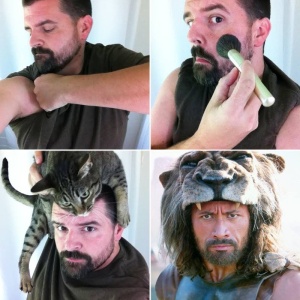 Omawarisan: Seeing Rob in his new Mr. Cuddlesworth hat struck fear into, well, no one.

Chris – Can you sssmmmmelllll…what’s on Rock’s head?

Ned: Some men will go to any length to cover their bald spots.

BrainRants: Nope. Not gonna piss off The Rock. Nope.

(Sadly, this first example is the closest we have to an actual celebrity look-alike. In other words, it’s all downhill from here. To keep that awkward momentum going, join me for the rest of The Saturday Six HERE…) 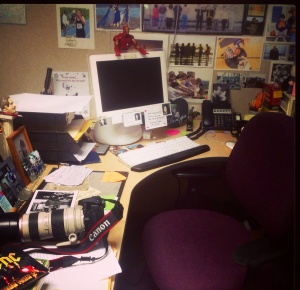 Where the magic happens. Or so I keep telling my editor…

In addition to the wild excitement my weekly Nickel’s Worth on Writing usually generates… (See? Did you feel that?) … this week’s NWOW has the added distinction of being [cue pocket drum machine] my 500th post!

WHOA LADIES! Keep those tops ON!

Since pushing the “publish” button on my first post about two years ago, more than 62,000 people have stopped in at some point — mostly while Google searching “monkey butts” or “Cheeto Clog” — and 5,250 of you decided to stay. I am very thankful for that and a little surprised, especially considering there are no Cheeto-clogged monkey butts anywhere on this blog. I’ve looked. And so has PETA.

Also over that same period, I’ve shared more than 50 weekly acorns of NWOW writing insights gathered through 15 years as a newspaper columnist tending the tree of literary wisdom — all of which I am currently squirreling away into an eBook that Publisher’s Digest has already predicted will be “…writing tips that are nuts.” END_OF_DOCUMENT_TOKEN_TO_BE_REPLACED 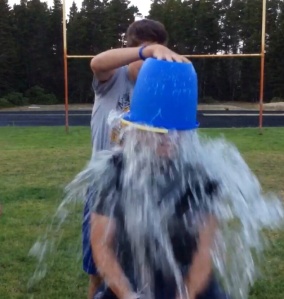 This would’ve been refreshing if we lived somewhere warmer like The Equator.

Ordinarily, my day doesn’t end with a bucket of ice water being dumped over my head by a junior varsity football team.

But thanks to a challenge issued by Adam Sendek at Long Awkward Pause, my plans to watch the sunset with my wife on the porch while drinking something icy and alcoholic turned into something else entirely.

Except for the icy part. There was actually plenty of that.

By now, most of you have seen at least one of ALS Ice Bucket Challenge videos circulating the Internet, during which [Spoiler Alert!] someone gets a bucket of ice water dumped on their head. What started out as a celebrities-only challenge to raise money for ALS (Lou Gehrig’s Disease) research, has grown exponentially to include thousands of non-celebrities, all of whom are united in hope that, some day, everyone on the planet will be able to trace themselves back to Kevin Bacon. END_OF_DOCUMENT_TOKEN_TO_BE_REPLACED 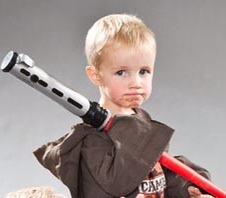 As I sat reading an article about the new Star Wars Trilogy now in production, I suddenly had an epiphany: Potty training our children had been a lot like training young Jedi Knights!

This prompted me to devise a what I am calling the Jedi Potty-Training Program — something that is spiritual, aggressive and, hopefully, a lot less messy than the old-fashioned method of staring at your child until they make a face that looks like they are having a BM, then racing them to the commode.

Because of our subject matter’s explicit nature, we will be using GALACTIC terms during this discussion. Whenever you see this special GALACTIC font style, you’ll know that I’m JUST MESSING WITH YOU.

Ha Ha! No, that font means that it’s important enough to justify wielding my special GALACTIC font-making powers as a way to highlight the fact that I’m BEING SUED BY GEORGE LUCUS. END_OF_DOCUMENT_TOKEN_TO_BE_REPLACED 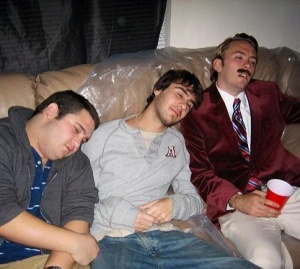 The kind of excitement my birthday is generating.

This morning, after unpinning my legs from under our Labrador, I pulled back the covers and rolled out of bed, bringing my feet to the floor for the first time as a 48-year-old.

So far, so good, I thought, then stretched, twisted and stood before sliding into my pants. I’ve always told myself, when I have to start sitting down to put my pants on, THAT’S when I’ll know I’m getting old. But this morning I realized that wasn’t entirely true: It’ll start long before that, when I can no longer get out from under the dog.

Naturally, the first thing my son asked me this morning is if I felt a year older. I told him I didn’t, but that I was starting to forget little things, like including his name in my will. And I might’ve accidentally worn his underwear while jogging yesterday. Plus, I may have posted a Justin Bieber link to his Facebook instead of his sister’s. But other than those minor memory glitches, I hadn’t noticed any real difference in becoming a year older. END_OF_DOCUMENT_TOKEN_TO_BE_REPLACED

It’s Saturday, and that means I’m over at Long Awkward Pause! Why? Because they have great coffee! Actually, that’s not entirely true. We don’t even have a coffeemaker. But there IS a Starbuck’s across the street, and Chris doesn’t know we have his wallet, so… Free Mochaccinos for everyone! While we’re there, each of us at LAP will be commenting on The Saturday Six, which are six related images that are just plain awkward — like all of my yearbook photos. This week’s subject? When you go onto the Internet asking for help Photoshopping the sun between your fingers like this guy did, be prepared for anything under the sun — as long as it’s not between your fingers…

1. Not Quite What I Had In Mind 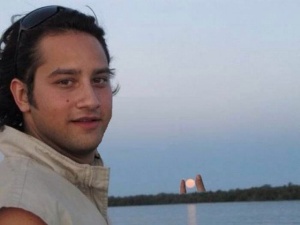 BrainRants: I approve – looks like some shit straight out of a Monty Python opener.

Ned: “And the Suns win it with a field goal!”

Omawarisan: I don’t think the one on the right is a finger.

Jack: Technically this is what he asked for, he has no reason to complain.

singlegirlie: Is that Jon Hamm and Tommy Lee nude sunbathing on the other side of those trees?

(Trust me, it gets much worse. How much worse? Join me for five more examples at Long Awkward Pause by pinching here!)