My cubby, complete with mint gum to wake me up for those late-night calls.

Anyone who has read my “About” page knows that, in addition to being a humor columnist, I’m also a volunteer firefighter — a subject I have purposely avoided in my columns because, let’s face it:

Entering a burning structure with someone who writes about glow-in-the-dark mice isn’t exactly reassuring.

For this reason, I have tried hard to separate my two pursuits. As I’ve discovered, this is a little like trying to separate marshmallows using a blow torch; the longer you keep at it, the more they blend together.

The truth is, once the emergency is over, firefighters are funny — which is why, after three years, many are still asking, “Why haven’t you written about being a firefighter yet?”

You asked for it.

Before we get started, let me clarify that I set some ground rules for myself. For example, in order to preserve anonymity, I will not use names like Sean Connor, Boa Warren, Adam Borg, Tim Snapp or Bill “Single-Lay” Schelpendorf.

And just to clarify, a “single lay” is when a water supply line is hooked to a hydrant from an engine.

For any of you who thought otherwise, while disappointed, I think it illustrates why I should cover some basic firefighter terms before we continue — and why I might need to seek a higher class of readership.

Here are some actual terms we use which, in spite of how they sound, have nothing to do with Internet searches:

Ok, I made that last one up just to see who was paying attention.

Now that we’ve established some basic terminology, and potential grounds for my termination, we will quickly move on to the next subject.

In fact, the quicker the better.

A lot of people have asked me why anyone would want to run into a burning building?

The simple answer is that firefighters are just like anyone else: Unless we are trying to avoid going to a “Twilight” movie marathon, we don’t want to run into a burning structure either.

However, there is also a deeper and more complicated answer, which involves a trait all firefighters have in common:

I should probably mention they also share an inherent need to respond to a crisis and help people, even if it means putting themselves at risk for the protection of others.

But mostly, we’re just trying to get our hands and feet warm.

Which isn’t to say the only time the engines roll is when something is on fire.

To ensure we are trained and physically capable of handling any type of emergency, such as an ATV accident involving a mushroom picker and Bigfoot, firefighters must complete a special academy designed to teach the skills they need, as well as test their physical agility and endurance.

This is accomplished through nine days of intensive hands-on training, live drills and nearly 100 hours of class time studying all seven seasons of “Rescue Me.”

(On a COMPLETELY unrelated note, if anyone at the station finds season five in the training room, it’s mine.)

So far, we’ve covered basic terminology and training, which brings me to another question people often ask:

To simulate the experience, grab all the dried out Christmas trees within a two-block radius, light them on fire, then jump in the middle wearing pot holder underwear.

[Official disclaimer: Do not do this].

While the protective clothing we wear, called “turnouts,” certainly helps, it’s still fire we’re talking about, which means you still feel like a Ball Park Frank. To complete the experience, crawl around on your hands and knees wearing a blindfold (since it will be too smoky to see) while carrying a 30-pound bag of dog food on your back to simulate the weight of your air pack. 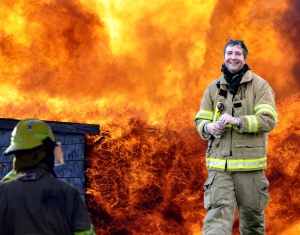 Sometimes, in a pinch, we fight fires with bottled water.

All kidding aside, as I mentioned earlier, I have avoided writing about being a firefighter because it’s something I take seriously.
However, as I’ve learned, sometimes its the humor that gets you through the bad stuff. When our pagers go off in the middle of the night, and we are buckled up heading to a scene with lights flashing and sirens screaming, you’re never sure of what you’re going to find — which is part of why we do it.

The other part is knowing, every time we buckle up, we’ll find people next to us in the engine who are there for the same reasons, and willing to put themselves in harm’s way to help others.

The only exception to this, of course, would be if there’s a glow-in-the-dark mouse involved.

(You can write to Ned Hickson at nhickson@thesiuslawnews.com, or at the Siuslaw News at P.O. Box 10, Florence Ore., 97439)

46 thoughts on “There’s nothing funny about being a firefighter… well, mostly”