I can’t tell you how many nights I’ve spent lying awake, staring up at the ceiling and thinking to myself:

Gee, if only they could make a super strong mouse. 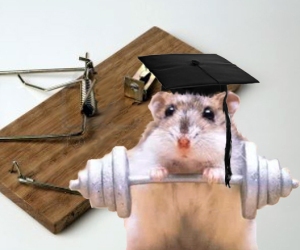 I bring this up because of several readers who sent emails regarding science news, several of which have to do with mice — and all of which I have combined into an informative feature we’ll call:

We’ll begin with a story about the creation of the first “super” mouse, which was sent in by Bonnie Higgins of Bridgeton, NJ, whose good intentions, I must assume, included keeping me awake at night armed with pepper spray and a sledge hammer. According to the article, scientists in Boston have created a mouse with giant muscles, “capable of enduring rigorous exercise for extended periods of time.”

This is great news for people like me, who often worry that the traps they put out might actually kill a mouse. Now mice will not only have neck muscles thick enough to withstand the trap, but they’ll also be strong enough to re-set those traps and then throw them back at me.

If we’re going to experiment with making something super strong, why not start with something more sensible?

“Hey, honey—have you seen the cat?”
“Last time I saw her she was chasing a mouse.”
“Where?”
“Through that hole in the wall. I think she’s on her way to the second floor. You can probably still catch her. The studs are slowing her down.”

So who cares if mice become strong enough to open the refrigerator and get their own cheese? We can always use our superior intellect!

Of course, this is the same intellect that we’re now using to make mice smarter.

This was bought to my attention by Jim Bricker of Lewiston, Idaho, who sent me an article headlined:

I should clarify that this was not from the National Inquirer, and did not include a photo of a mouse with an enormous cranium writing on a chalkboard and wearing a propeller cap. According to Reuters health and science correspondent Maggie Fox, researchers at Harvard Medical School (again in Boston) have found a way to make a mouse’s brain so large that it has to fold up — much like a human’s — in order to fit inside the skull.

After reading this, two things are clear:

1) I will not be visiting Boston anytime soon.
2) Anyone who does plan to visit Boston should do so NOW, before it succumbs to a new race of highly intelligent mice with giant muscles.

And let’s just hope none of these mice ever reaches the University of Hawaii because, if they do, they might also glow in the dark.

That’s right. According to an article sent in by Brandy Sherman of Cottage Grove, Ore., professor Anthony Perry has created an entire litter of green, glowing mice.

The world’s most irritating night light?

How the heck should I know?

What I DO know is that I plan to buy whatever kind of cheese it tells me to.

(You can write to Ned Hickson at nhickson@thesiuslawnews.com, or at the Siuslaw News at P.O. Box 10, Florence, Or. 97439)