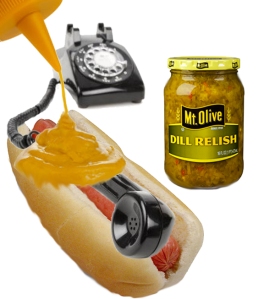 With energy costs on the rise, around the Hickson household, we’ve been scrutinizing our monthly bills a bit more carefully. Among them, our landline telephone bill.

Now, in the past, we’d considered ourselves savvy consumers because we took the time to look for things like calls to Kohldazhell, Poland, and any connections lasting for more than 24 hours. In addition, any 1-900 calls were categorically disputed. After which I would call the phone company and do the same.

However, all those itemized surcharges in small print at the bottom of the bill were sort of like the little tag you get inside of your new clothes that says “inspected by No. 10.”

I’m not sure who he or she is, or what that inspection process entails.

I just assume it’s important enough to include in my pants.

But in this case, as we began looking more closely at our phone statements, we started questioning the validity of some of the charges which, until now, had been averted like the list of ingredients on a package of hot dogs:

All together, there are 17 “extra” charges on our bill. For the most part, I understand five of them: bill statement fee, federal tax, public utilities commission fee, residence line fee and the state 911 fee. While I understand these fees, I don’t necessarily agree with them. For example, the $1.50 I pay for receiving my billing statement each month could just as easily be dropped if they’d just stop sending me a bill in the first place.

And though I’m not sure why I pay a fee to the utilities commission, I figure it’s worth one penny a month to keep them from holding a telethon.

That said, the remaining 12 charges seem, at the very least, questionable. First, there are a number of “universal” fees I incur, beginning with a charge for “Universal Connectivity.”

For those of you who may be wondering; Yes, “connectivity” is really a word, which means one of two things according to Webster’s Dictionary:

1) To connect something
2) The connective muscle tissue that holds antlers in place.

Since I’m (nearly) certain that my monthly expense of 42 cents doesn’t go to help deer suffering from DAS (Droopy Antler Syndrome), then I can only assume it’s for being connected to the universe.

The thing is, I get at least five calls a week — usually while I’m eating — asking about long distance service. I think if someone had called to offer phone service to places other than my own planet, I would’ve remembered.

Though there are other fees that seem questionable — such as a separate “User Charge,” which sounds a lot like what I’m paying for in the first place, there is one charge that I find a bit unsettling:

When I called to dispute this fee, the phone company said they’d be happy to eliminate it. Just as long as I understood that my protection would no longer be guaranteed.

I decided to go ahead and pay the extra dime, leaving me just enough pocket change for a hot dog.

Heavy on the mustard.

29 thoughts on “Your phone bill goes down easier with mustard”