Because it’s Easter, I chose a special selection for this week’s Flashback Sunday, which is a post that has never appeared on this blog. I chose it because 1) it fits the “flashback” criteria of a writing from my past, 2) many of you have asked about the connection between getting my dog neutered and my own vasectomy mentioned in a recent post, and 3) Easter is about rebirth in many cultures, so this subject seemed somewhat fitting… 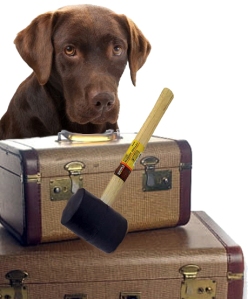 It was a foregone conclusion that we would have our dog Stanley neutered once he was old enough. Just like it was a foregone conclusion that, when it came time to deliver him into the hands of the vet, I would be playing the role of Judas. I thought about disguising myself and borrowing someone else’s car so that Stanley would not associate me with his loss of malehood. My ex-wife told me I was being silly.

He’s a dog, she reminded me, and capable of recognizing my scent no matter how I was dressed.

It didn’t help the situation that my four-year-old son, after overhearing our conversation, had reached the conclusion that something serious was happening, and that it involved — but wasn’t limited to — Stanley turning into a girl and biting daddy.

Naturally, as responsible parents, we then sat down with our son and, together, convinced him that he had a hearing problem. We informed him the problem could be solved by allowing his ears to rest, which he should do by covering them as much as possible.

However, we realized our son would, from time to time, need to use his hands for something other than covering his ears. So, as rational adults, we also developed a secret code language in order to safely continue our discussion about Stanley. Using our new code, I explained that I was concerned how Stanley would react once he got home and discovered his luggage had been lost, and how he might hold me personally responsible since I was there when his bags were checked in.

My ex-wife argued that dogs lose their luggage every day, and none of them go after the pilots.

I admitted she was right, but that most pilots aren’t standing next to a passenger when they’ve just realized there’s nothing waiting for them at the baggage claim.

That’s when she explained to me that if Stanley missed his flight today, my luggage would be waiting for me on the front porch when I got home.

As I sat in the vet’s office that afternoon, I avoided all eye contact with Stanley who, at 10 months old, still hadn’t learned to fear people wearing latex gloves. When it came time, the vet explained that it was a simple procedure. That Stanley wouldn’t be conscious during the operation, and that, as a male veterinarian, neither would he.

But he assured me his assistants were perfectly capable of doing whatever is supposed to be done down there.

When they took Stanley away, he was happy.

When I picked him up a few hours later, he was still happy. Even though, with the cone over his head to keep him from licking his stitches, he looked like a dumb cousin to the RCA dog who had gotten a running start and gone headfirst through the small end of a Victrola speaker.

My ex-wife called a short time later, and it was obvious that my son was with her because she asked how Stanley’s flight went.

I told her the plane landed safely, and that we would be home just as soon as I determine the physics necessary to fit a three-foot diameter cone through a two-foot-square car door opening.

Ironically, we’d probably still be there if Stanley hadn’t fit in the luggage compartment.

15 thoughts on “Pack your luggage; it’s time to get the dog neutered”