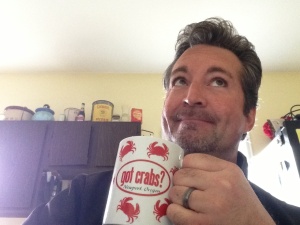 Imagine my surprise when, on Wednesday, I opened my email to find something other than a window full of male enhancement offers and senior dating website links? That’s right. Sandwiched between them was something totally unexpected; something that meant a window of possibilities was about to open. I’m sure you’ve probably guessed what I’m talking about:

An email from a dethroned prince in Mozambique looking for an American bank account to send his fortune to for safe keeping.

It was while contemplating the legitimacy of Prince Imgonna Takeyourmonee’s offer that I noticed another email, this time with a name that was much easier to pronounce: Cheri Lucas Rowlands. She informed me that my latest post (If you can’t fix it with gum and duct tape, it’s not a real VW bus), was going to be Freshly Pressed.

She also told me if the excitement lasted for more than four hours, I should see a doctor.

But she did say to be prepared for a lot of activity on my blog — and she was right. I’ve spent the last two days responding to hundreds of people who have left some really nice comments, like “I am liking your interesting site very much,” and “Glad I found your site. Learn how I made 3 million dollars in two weeks blogging as a prince from Mozambique.” As a result of all this blog traffic, I have fallen behind on my posting.

So does that mean I don’t have this week’s edition of Ned’s Nickel’s Worth on Writing?

Yes and no. For those who are visiting for the first time, I should explain that each Friday I post something insightful about writing, pulled from 15 years as a humor columnist. It doesn’t matter from where I pull this wisdom from. And trust me when I say you probably don’t want to know. What I can tell you is that it’s a feature some of today’s best writers have called, “The kind of advice I wish I had been given when I was first starting out, back when I was a busboy,” and “Each week I find myself at Ned’s blog, where I often take a long nap.”

This week, however, I’m going to do something a little different. And no, this isn’t like the last time I tried to “do something different” by typing with my feet. As we all know, that was a disaster and led to the worst toe cramps ever. This week, I’m looking for your insight and feedback. As some of you know, I just finished the final draft of Humor at the Speed of Life, which is a book I have coming out in November. Possibly sooner, if I can get all the pages stapled by then. This morning, I am posting the introduction here. The purpose of the short intro, titled “This Just In…” (which some of you will find familiar) is to give readers a feel for the tone of the book, as well as the idea behind it.

I’ll let you decide if it works, and welcome any feedback or suggestions you may have, as long as it comes in the form of praise.

Seriously, thank you in advance for your thoughts. Especially you, the one with the hot mocha. Those weren’t exactly the thoughts I had in mind, but I like your thinking…

After 15 years as a humor columnist, it finally hit me. And by that I mean my editor’s stapler. She had been threatening to throw it since 2004, when I first discovered the secret candy drawer she had cleverly labeled: Extra Work for Reporters. For the past nine years she had been warning me, “If you don’t stay out of my candy drawer, I am going to set this thing for ‘stun’ and hurl it at you!” On this particular day, I received an answer to the age-old question: What would you do for a Kit-Kat Bar?

But as I sat there, blurry-eyed and rubbing the back of my head, I came to an important and potentially life-changing realization:

I really needed to publish this book now, before she gets a new stapler.

Once my editor replenished her candy stash, there was a good chance another direct hit would result in serious brain damage, ending my career as a journalist and leaving me to write for a fortune cookie company — or worse: daytime television. The truth is, readers have been asking me for years to compile a book of columns. As one reader from Gwynette, Ga., wrote in, “If you ever come here for a book signing, you better have pastries or something.” When you receive that kind of validation from readers, you don’t want to let them down. With that in mind — and a week’s worth of medical leave — I began sifting through more than a decade’s worth of columns written since I began here at Siuslaw News in 1998. Many of the columns in this book appeared long before syndication; a few never saw publication at all; and at least one got published only because my editor was on vacation.

You’ll find this book has been divided into six sections, making it easy to find columns tailored to meet your specific reading needs. For example, let’s say you’re looking for Three Good Reasons to Avoid Any Monkey With a Pet Chihuahua. That would obviously be a hard-hitting news story, and therefore in the section: This is Why I Became a Journalist (I meant that as a question).

Or let’s say you want to know if Today’s Tougher Tax Laws Will Let You Depreciate Your Ostrich? If you answered Social Trends and Other Frightening Anomalies for $100! then you are absolutely correct! (But you really need to cut back on the Jeopardy! watching.)

Other sections in this book include:

Parenting Is as Easy as One, Two… Scream
(My fountain of knowledge on parenting is an open bar book)

Why Is the Dog Wearing Cowboy Boots?
(They say pets help us live longer. “They” haven’t met my dog)

In the pages that follow, you will find what represents my body of work as a humor columnist. My apologies in advance for not getting to the gym more often…

86 thoughts on “Admittedly, I’ve been resting on my Freshly Pressed laurels”