If you’re reading this, Congratulations! You are part of a selective group of individuals who, like yourself, have met a basic standard for visitors to this blog, which is that you must be irrefutably awake. Around here, Sundays are for Flashbacks. This has nothing to do with tequila, getting older or this morning’s proximity to Saturday night — and everything to do with the combination of all three. In addition, it also has to do with a Flashback Sunday tradition that began almost a year ago… assuming I’m not having a flashback right now. Either way, join me as we dig back into the archives to 2002, back when I thought “blogging” was slang for something inappropriate between loggers… 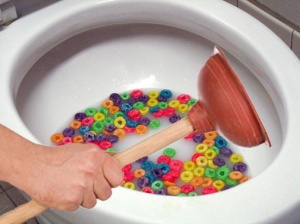 There are certain things all males must learn before they can become a man. This knowledge is passed from father to son, and includes fundamental life skills such as shaving, car repair, burping the entire alphabet, and making fart sounds with your arm pits.

However, there is a crucial first step along the road to manhood that every male must eventually make alone. In a cruel twist of fate, this usually occurs around age three, when fluid intake is high, and hand-eye coordination is equal to that of a wild chimp.

Our son began taking this important step soon after we discovered we did not actually have a leaky toilet. Unfortunately for my wife, she was on the receiving end of this discovery after walking into the bathroom and startling our “man-in-the-making.” And I’m pretty sure I don’t need to explain what he was making. Suffice it to say, I was immediately informed of the situation. Not in so many words, but in a sudden scream that, in my opinion, really didn’t help things.

What did help is that I kept this opinion to myself.

My wife told me that, as the father, this was MY area, and that I was responsible for teaching him the proper technique. Like any man, I had already made this assumption even though, like any man, I found it ironic given my past performance. Amazingly, this vicious cycle continues despite millions of years of evolution proving that, while man can write his name on the ground in cursive from three feet away, he can’t hit a target which is, by comparison, roughly the size of the sun.

Because I knew my wife would ultimately hold me responsible for any of my son’s shortcomings, I was motivated to move things in a positive direction as quickly as possible. This, of course, meant spending quality time together in the bathroom — which would be easy since my son was now in there every 15 minutes.
However, it was during one of these visits that I noticed something that not only explained his poor aim, but suggested he might find work at an early age pulling taffy.

“You have to relax, son,” I said, looming over him. Realizing that I might be making him nervous, I stepped back just in time to watch him lay down what firefighters refer to as the “initial attack,” which would’ve been the appropriate response had the toilet suddenly burst into flames.

That’s when I remembered reading about someone who used Fruit Loops in the commode as a way to provide their little firefighter with something to aim at. This made perfect sense to me. In fact, I decided to improve on the idea by NOT using Fruit Loops. I was afraid my son might get discouraged because they’re so small.

As it turned out, he was more discouraged by the fact that, within eight seconds, the Shredded Wheat I used swelled to eight times its normal size and clogged the toilet. I mean it; in the blink of an eye it looked like we’d been visited by a very angry Euell Gibbons.

After a trip to the store for some Fruit Loops, we decided to try again. As we stood there waiting, staring down at the colorful little targets floating in a sea of Tidy-Bowl blue, I decided right then and there that I would probably never eat Fruit Loops again.

And Shredded Wheat was out of the question.

In fact, I’ll be lucky if I can still walk down the cereal aisle at the grocery store.

On the other hand, the trick does seem to be working. We’ve had almost no accidents and my wife is very pleased with my progress.

(Ned is a syndicated columnist for News Media Corporation. You can write to him at nhickson@thesiuslawnews.com, or at Siuslaw News, P.O. box 10, Florence, Ore. 97439)