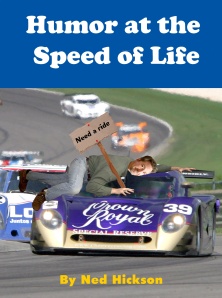 As with firefighting, when it came to creating my book cover, I insisted on doing my own stunts. In this case, it meant gripping the top of a race car speeding in excess of 120 mph while simultaneously — and this was the tricky part — not messing up my hair. Oh, and I also had to hold up a cardboard sign with my free hand. We considered the idea of holding the sign between my teeth, but that idea was scrapped on the first attempt after driving through a cloud of mosquitos…

OK, fine. None of that really happened. But I would almost rather risk my life on the hood of a speeding car with a mouth full of mosquitos than promote my book, which I’ll be doing for the first time this weekend at a local book festival. It’s not that I’m one of those authors who likes to write about — but who doesn’t like being around — actual people. In fact, I am very much a people person. Not in a Hannibal Lector kind of way, but because I truly enjoy talking with and meeting new people. My anxiety over attending the book festival also has nothing to do with any fear of talking in front of large crowd, or in my case, a handful of strangers looking for the restroom as I read excerpts from my book. The truth is, I volunteer as a host for several community fundraising events each year, so being in front of a crowd — or even several confused strangers — isn’t the issue.

I have never gotten comfortable with promoting myself. Several years ago, after my divorce, I tried my hand in the sales department here at Siuslaw News in an effort to make some extra money. Most of my sales visits went something like this:

Me: Hi Bill!
Bill: Hey Ned!
Me: You’re probably short on cash and, given the state of today’s economy, don’t have any money to spend on advertising, so I’ll just show myself out.

What makes this weekend’s book festival situation particularly tough is that my book won’t be released until December. That’s right. As if I didn’t already have enough anxiety about promoting myself, I’ll have the added pleasure of doing so while sitting at a table without any ACTUAL BOOKS to show — or hide behind. My publisher assures me it doesn’t matter, and that there will be a big poster, bookmarks and fliers to hand out at my table and after my reading.

“These are going to be your readers,” my publisher insists. “They just want to meet you, find out when the book will be available, hear some excerpts and maybe pre-order copies. Don’t worry! It’ll be fun!”

And I’m sure it will be. Especially if I can talk her into letting me arrive on the hood of a speeding race car, with a few mosquitos in my teeth. Hey, it could be a nice icebreaker.

If you happen to be on the Central Oregon coast this Saturday, stop in at the Florence Festival of Books. Please.

I promise I won’t try to sell you anything.

80 thoughts on “Yes, I pretty much did my own stunts for this book cover”