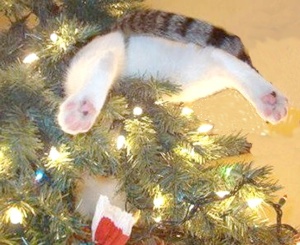 What makes this process especially difficult is sap. You see, it’s not until after spending the better part of December attached to the mid-section of our tree that our cat realizes she can no longer retract her claws.

A few years ago, this actually resulted in a front page story in the Weekly World News under the headline:

It’s not like we haven’t tried to keep this tragedy from happening. In fact, we’ve even taken our cat to a pet psychologist, thinking that maybe she suffers from a traumatic experience that is somehow triggered by the site of Christmas trees — such as an unresolved conflict with a strand of tinsel.

After six weeks of therapy (equal to eight years in cat time), the only thing the doctor was able to tell us for certain was that our cat had been Shirley MacLaine in a previous life, which, according to him, isn’t all that unusual.

In short: He had no explanation for her behavior.

This, of course, led to my own — admittedly less scientific — diagnosis, which is that our cat is just crazy. This forced us to take drastic measures this year in hopes of avoiding another appearance in the tabloids. To achieve this, we came up with the idea of spraying our entire tree with WD-40. Initially, this seemed to be the answer as we watched our cat slide down the trunk and into the water bowl. But as we soon discovered, while WD-40 kept our cat out of the tree, it also kept any ornaments from staying on for more than six seconds.

This left us with a handful of desperate ideas, such as moving one of our stereo speakers under the tree and playing “Dogs Barking Jingle Bells” 24 hours a day.

That idea was dropped pretty quickly.

After six barks, to be exact.

We also toyed with the idea of decorating a dogwood tree, the logic being that a cat wouldn’t go near a tree with the word “dog” in its name. That suggestion was nixed after realizing we’d first have to teach our cat to read.

What all of this is leading up to is something you’ve probably already guessed, which is that, once again, the Christmas tree in our living room will remain there until it is completely brown and withered, and the sap has weakened enough that our cat can safely be detached.

In the meantime, we have already begun planning for next year, when we’ll try to coax our cat to move high enough on the tree that we can use her as a top ornament.