(With it being Easter, I thought I’d skip this week’s edition of Post Traumatic Sunday and run a different kind of flashback, reminiscent of when my children were small and the Easter stakes were always high. Whether this day is observed in your family or not, we can all agree any day that you can be together is worth celebrating…) 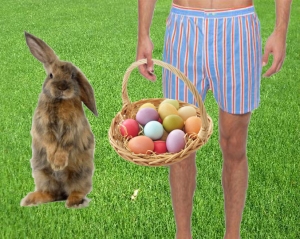 In the wee hours this morning, something magical happened in backyards all across America as, one by one, each of them was visited by …

You guessed it! A half-naked father hiding Easter eggs.

That’s right, the same fathers who were stomping on the roof with sleigh bells Christmas Eve were out in the yard in their boxer shorts with an arm load of colorful eggs not long after sunrise.

Keep this tradition alive while trying not to step in anything that could elicit a response deemed inappropriate for Easter morning.

This generally follows a week of preparation, most of which is spent looking for the latest advancements in egg-dying technology. My parents didn’t have to worry about this. When I was a kid there was only one kit available for making Easter eggs. This kit included four colored pills, which could be combined to make additional colors or, as I preferred, swallowed whole and used to freak out kids in the restroom at school. The green pill was particularly effective.

The red pill I tried only once because it gave me nightmares.

As I was growing up, there were a number of advancements in egg-dying technology. For example, the highly touted “wand” made of thin copper, which could be used for dipping eggs without making a mess. I know this because the back of the box showed a cartoon family making lots of eggs under the watchful eye of the Easter Bunny who was saying, and I quote,

There were a couple of things that bothered me about this.

First, it always looked like the family in the picture was being forced into coloring eggs by a brooding, six-foot-tall rabbit blocking the only exit from the kitchen. Sure, everyone was smiling, but who’s to say they weren’t just buying time until help arrived? Mysteriously, this family appeared on the back of the box for several years, and then — poof.

I was also bothered by the fact that despite what I’m sure must have been a rigorous testing and design process, the “wand” usually collapsed on itself and dropped the egg directly into the dye the first time you used it.

After becoming a parent, I took it upon myself to find out who was responsible for this tradition. As it turns out, Germans introduced it after settling in Pennsylvania Dutch country in the 1700s when, in an eager attempt to share their homeland’s annual spring celebration, hundreds of German children began running around yelling: OSCHTER HAWS! OSCHTER HAWS!

Not knowing it was a call for the Easter Bunny, Native American children fled, taking their breakfast of boiled eggs with them and inspiring the first Easter egg hunt in the New World.

Eventually, the Easter Bunny tradition was embraced by all parents who, like German parents, realized it could be used as leverage against their children.

Three hundred years later, little has changed. Good girls and boys still get a visit from the Easter Bunny, and fathers still stumble outside at first light to hide colored eggs.

That said, I’ll take this opportunity to apologize to my neighbors in advance of Easter, just in case I step in anything left behind by something other than the Easter Bunny.

61 thoughts on “More often than not, the Easter Bunny wears boxer shorts”

Leave a Reply to Chris Brown (not the felon) Cancel reply