Everyone needs to get away sometimes. Even rabid squirrels. For those who noticed The Box was missing from last week’s line-up, there’s a good explanation for that — and you may or may not like it, depending on your proximity to a blogger named Kerbey at I Don’t Get It. That’s where Skippy was headed last Tuesday when, following my weekly cry of “RELEASE THE SQUIRREL!” he skittered out the newsroom door and hopped aboard a casino shuttle headed to the Eugene Airport.

As many of you know, Skippy is a crucial part of helping me make a weekly random selection from The Box, which contains dozens of submitted photos that have remained unclaimed and unidentified in our newsroom since the 1980s. To ensure impartiality, I wait until my fellow reporters are deep in thought (deleting all traces of inappropriate Google searches) before spreading the photos on our newsroom floor and releasing Skippy. The photo closest to the first person to scream is selected as our mystery photo.

“Skippy” the rabid, blindfolded squirrel in his natural habitat. Pretty much.

I then put my investigate journalism skills to the test by attempting to identify the image — but not before prying Skippy from the leg of one fellow reporter, named Jack, who insists on wearing corduroy pants. Skippy really, really likes the feel of corduroy.

As I mentioned, however, last Tuesday was different. At first I thought maybe it was because Skippy needed a break. Maybe it was a case of spring fever? Or maybe it was because Jack wore cargo shorts to work? It wasn’t until a I found an email requesting our assistance that I realized Skippy had gone to retrieve the following mystery photo from Kerbey.

Apparently, I need to explain to Skippy how emailing photos eliminates the need to physically retrieve them and, perhaps more importantly, can help avoid emergency landings by panicked flight crews.

Because Kerbey is an accomplished investigator herself, she was able to offer an important clue: she was pretty sure the woman to the left of the woman holding the card is Rose Marie from The Dick VanDyke Show. And being a professional journalist, I believe her.

Even with that solid lead in place, many questions remained:

1) Why was a young Estelle Getty of The Golden Girls grabbing the wrist of the woman with the card? 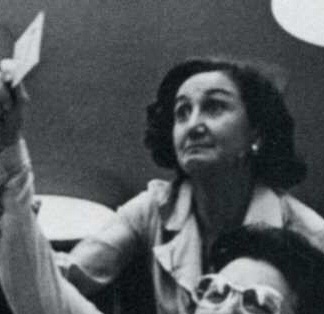 2) Given that I was too young to be a male stripper at that time, why is everyone laughing?

3) Why did that man’s sideburns come back in style but not his sport coat?

4) Is it just me, or does the woman in the very back appear to be at a control panel aboard the Starship Enterprise?

Being an investigative journalist at Siuslaw News, it’s my job to do more than raise questions; I’m also responsible for making coffee. In addition, it’s also my job is to find answers to questions like those raised by this photo, and then explain my conclusions in a way that makes you forget I never actually left my desk. That said, based on my 15 years of journalistic experience and extensive research over the past 10 minutes, five of which was spent making more coffee in the break room, I feel confident with the following conclusion:

This photo was taken during a rehearsal for the original Star Trek pilot episode, when Rose Marie was playing the role of “Uhura” and “Spock” was supposed to be played by Estelle Getty — with the guy in the sideburns playing “Captain Kirk.” The sideburns was the only part of the pilot that made it into the final version of the show. The photo captures the exact moment everyone who was involved in the project realized what a huge mistake they were making. The woman in the glasses, in an effort to stop production, is preparing to rip up her SAG card as Estelle Getty attempts to stop her.

And there you have it. It all makes sense once the pieces are put into place. Just don’t think about it too long.

Do you have a mystery photo? Do you like rabid squirrels? Then I invite you to send yours to nedhickson@icloud.com, (the photo, not a rabid squirrel) where you can rest assured I will get to the bottom of things. But please no photos of anyone wearing corduroy pants.

Leave a Reply to The Hook Cancel reply