(Today’s post is unusual because, for the first time, this one actually comes as a request. To put into perspective just how unusual this is, think of drinking a beet frappuccino, then requesting another one. Then again, most people aren’t Carrie Rubin at The Write Transition where, in addition to her terrific perspective on life and writing, she also offers a “very tasty” beet frappuccino recipe…) 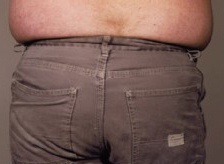 I have a favorite pair of jeans I refuse to give up, and which, over the last few years, my wife has attempted to eradicate on six different occasions. She hates these jeans because, according to her, they are “ripped, frayed and embarrassing.” Particularly when I forget to change them before going out somewhere in public, such as our front yard. Her attempts to get rid of my jeans have escalated from them being “lost,” to an incident last week in which she claimed my jeans “spontaneously combusted,” forcing her to put out the flames with the nearest extinguishing device: A meat cleaver.

She later apologized for hacking my jeans, telling me she reacted instinctively to a dangerous situation. I told her I understood and that, instinctively, I planned to continue wearing my newly perforated jeans, at least until the remaining threads give way to the force of gravity and I am suddenly de-pantsed.

Probably while raking the yard.

There was a time when my wife actually liked seeing me in these jeans. Whenever I wore them I’d get…The Look — an eyebrow raise and quick scan of inventory suggesting the merchandise might be leaving the shelf before I could announce my blue light special. Now when I put them on all I get is a roll of the eyes suggesting I hold a clearance sale to reduce some of my inventory.

Does that mean I’ll stop wearing them?

That’s because I’m a man. And as a man, looking good isn’t nearly as important as proving I can still fit into the jeans I wore eight years ago, even if getting them on requires a case of cooking spray and an electric winch attached to the bumper of a Chevy 4×4. It doesn’t matter that the waist is so tight my spleen is temporarily relocated behind my ears. Or that the contents of my pockets look like they’ve been vacuum packed.

This illustrates a fundamental difference between how men and women think. Women by their very nature are theoretical thinkers. For example, just because fitting into the same jeans they wore in their early 30s is now like trying to stuff eight pounds of hamburger into an espresso cup, then, “theoretically,” those jeans no longer fit. (Naturally, there are women who are exceptions to this rule, as anyone who watches daytime talk shows can tell you.)

Men, on the other hand, think in terms of practicality, i.e., if we can practically button our jeans without losing all feeling in our legs, then they obviously still fit. It doesn’t matter that our mid section is hanging over our belt like an over-proofed dinner roll. What matters is that we are in our jeans, and therefore “practically” in the same physical shape we were during our early 30s. Assuming, of course, that we were shaped like an inverted milk jug.

So, yes, I will continue to wear my “ripped, frayed, embarrassing” and now recently cleaved jeans. In fact, I may even wear them when I get home tonight.

Unless my wife has hidden the cooking spray again.

93 thoughts on “If the jeans fit, wear them (At least until your legs go numb)”