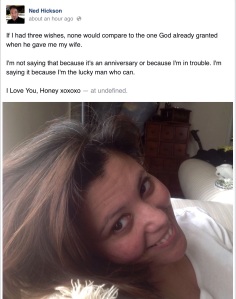 “If I had three wishes, none would compare to the one God already granted when he gave me you.”

I wrote those words on my wife’s Facebook today, as well as my own, inspired by no other reason than being the lucky man who can say them to her.

It’s not our anniversary;
Valentine’s Day is still more than a month away;
And no, I didn’t do something stupid.

I just love her.

It’s been that way since the moment we met. Honestly; the moment we met. And the only reason I didn’t say it right then and there was because I didn’t want to seem like a weirdo on our first date; there was plenty of time for her to figure that out later. I can’t explain how I knew so quickly and completely that I loved her. The closest I’ve come to describing it is that, even though we’d never met, somewhere in my heart I already knew her — so she was easy to recognize. I’ve been thankful for each day since and I make sure to tell her so. Today it just happened to be on Facebook.

After doing so, I was surprised at how quick people were to assume there was an alterior motive other than simply being inspired by the love I feel for my wife.

“What’s the occasion?”
“Crap! Did you forget your anniversary?”
“Whatever you did, she’ll forgive you after this.”
“If you were hoping to get lucky, that should do it buddy!”

Sometimes, not having a particular “reason” to say something heartfelt is exactly the reason to do so. Expressing your love and appreciation for someone shouldn’t require an occasion.

It simply is an occasion.