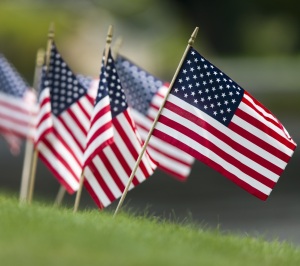 It’s been 14 years since I introduced my oldest daughter to the meaning of Memorial Day. She was seven then, but I still remember the short gusts of warm wind on my neck, the earthy smell of the fresh-cut grass, and the hushed snap of small American flags standing like sentries next to dozens of tombstones along the hillside.

“How come some of them have little flags, and some don’t?” my daughter asked.

It was near sunset as we strolled through our local cemetery. Though we didn’t have any family members buried there, I thought it would be a good opportunity to explain the meaning of Memorial Day to her.

“When people fight,” she answered, then clarified herself; “A whole bunch of
people.”

“That’s right, but do you know why they fight?”

She thought a moment, then shook her head.

“Well, they are usually trying to protect something,” I explained. “Like where they live, or the kind of church they go to, or the right to express themselves. These little flags are for people who fought for you and me — so that we could have all those things.”

“And they died while they were fighting?” she asked, and crouched in front
of a small flag that had fallen over. She looked at me, and I nodded.

“A lot of them did,” I answered, watching as she stuck the little flag back
into the ground. “But not all of them. Some died later, after they were done
fighting for us.”

“But they still get a flag, right?”

We sat there for a moment, watching as the fabric of stars and stripes waved in the evening breeze. Hugging her knees to her chest, my daughter surveyed the hilly grass, and the long shadows stretching away from the setting sun.

“There sure are a lot of little flags out there,” she said finally.

She was silent again, and I began to wonder if I had laid too much reality
on her.

After a moment, she stood and brushed grass from the seat of her pants.
“C’mon, Dad,” she said, and reached for my hand.

“Uh-huh,” she said. “After we fix those other flags down there. Some of them fell over. We need to make them straight.”

This Memorial Day, take time to notice the little flags. There are many.

And they all deserve our attention. 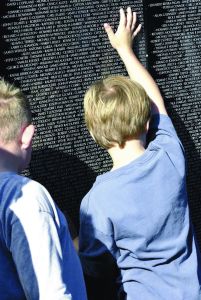 42 thoughts on “Finding the meaning in little flags”