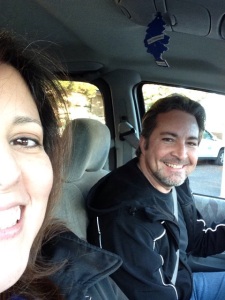 Nine years ago tonight, I had my first date. I was 40. It’s not that I hadn’t been on other dates in my life. It’s just that, from the very first moment we took each other’s hands, none of the others seemed to matter anymore.

Because nothing compared to this one.

The last one I’ll ever want.

Both of us were recently divorced after long, unhappy marriages. We both had two children at home. And both of us had joined a dating website a month earlier within a few days of each other. Fate, it seemed, had already set things into motion. Nine years and one pair of wedding rings later, I’m still thanking fate each and every day…

Oct. 28, 2006:
My search for a red rose after making the hour-long drive to Salem for our first date had put me behind. Coupled with the fact that I hadn’t been on a real date in nearly 20 years, had lost 23 pounds since my divorce several months earlier, and was driving a Plymouth Voyager mini-van, I technically had four strikes against me already. Plus, after several weeks of chatting together on Match.com and long evening phone calls, she had finally posted her profile picture. When I saw it, I realized I wasn’t only in danger of striking out before our date even started:

Heck, I was batting out of my league.

Fortunately for me, her shift at the Wachovia Bank call center was running late as well. This allowed a quick stop in a nearby Denny’s to freshen up before meeting her in the bank parking lot a few blocks away. I literally sprinted inside the restaurant, past the hostess desk and into the restroom carrying a small sack of toiletries: cologne, toothbrush, hair spray, razor, etc. When her text arrived telling me she was clocking out, I scooped everything back into the sack, rushed out the door and jumped into my mini van. I’d like to say I then “sped away,” but as I mentioned, it was a mini van; a slap of the emergency brake and defiant groan from the power steering was about as close to Tokyo drifting as I could get. To this day, I still wonder if the night manager at Denny’s thought I’d planted a bomb in the men’s room.

A few minutes later, I pulled into the Wachovia parking lot and quickly spotted the blue pick-up truck she had asked me to park next to. Killing the engine I took a deep breath. We had talked for more than two hours every night the past few weeks, discussing our single parenting challenges, our families, favorite movies, what we’d learned from our failed marriages, why mayonnaise is superior to Miracle Whip… but would it be the same in person?

Or perhaps more importantly, why didn’t I rent a cooler looking car?!?

My phone vibrated with her latest text:

Taking another deep breath, I stepped out into the parking lot with my single rose and stood in front of the Voyager. Do I cross my arms? Put one foot up on the bumper? Lean back against the hood? Did it even MATTER since — let’s be honest — there’s no way to look the slightest bit debonaire standing next to a mini van?

I opted for the one-footed lean-back, with one hand holding the rose, and my free hand stuck in my pocket, being careful to avoid nervously playing with the keys in my pocket because it could be misinterpreted as playing with something else. From across the parking lot, I saw two figures exit the front doors of building. One had her head dipped low as she carried a basket of something. The other, a fiery black woman I came to know as Charleta, held her head high as she blatantly scoped me out. I later learned my wife was too nervous to look up, so Charleta did the looking for her.

After sizing me up, my wife said Charleta whispered, “Oh, he is definitely fine for a white guy.”

As they approached, I thought it smart my date had decided not to come unaccompanied into a dark parking lot to meet someone she only knew from phone conversations and emails. I also realized the basket she was carrying was full of…

Was her ex-husband trying to win her back? Who could blame him? Or maybe they were sent by someone else? A different date or admirer? The bastard!

As they got closer, my wife glanced up and we met eyes for the very first time. To this day, I can honestly say I have never looked into a more beautiful, warm and enticing pair of eyes. And when she smiled? It was all over for me.

I handed her the rose. “I have to say, I’m feeling a little inadequate right now.”

Handing the basket to Charleta, she took the rose as if it was an entire bouquet and breathed in its fragrance. “This rose means more to me than any of those. They came as a gift from the office. It was my birthday earlier this week, so I was bringing them home for the weekend. But this? This one is special.”

We instinctively reached to hold hands and, when our fingers met, it was like the final two pieces of an unfinished puzzle coming together. A perfect fit crafted just for each other. We were both smiling and couldn’t stop. Something magical was happening and we both knew it. Neither of us remembers exactly when Charleta left because, in that moment, time literally seemed to stop. We were alone. In the parking lot. Possibly even on the planet. As we stood gazing at each other, there were no words because we didn’t need them; our hearts had recognized each other and were speaking for us.

And I knew — absolutely KNEW — I was exactly where I was supposed to be for the first time in my life; this place; this moment; with this woman.

Squeezing her hands, I thought to myself, “You were so worth waiting for.

…Nine years later, I know I’d wait all over again for the chance to love her.

I’m just glad I don’t have to.

Thank you, Dear Readers, for letting me share the meaning of this day with all of you. But let me just say, if things go the way I think they will tonight, I won’t be sharing that part with you…