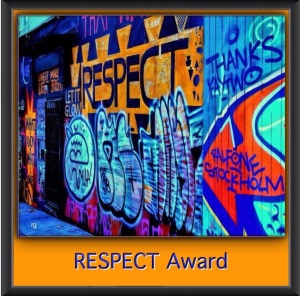 Handshakes are important because they tell me a lot about a person. In all my years, I’ve never been disappointed by anyone who has given a firm, enthusiastic handshake (not counting election years.) My father told me never trust someone who doesn’t offer their hand, or if the hand they offer is limp or unengaged.

“Either way, chances are they aren’t the kind of person you can trust with an agreement or respect in a disagreement.”

In the blogging world, we rarely get the chance to shake hands in person. We do it with our words — in what we say in our posts, what we share, how we comment and reply. And though I can’t say I’ve had the pleasure of shaking the hand of Robert Goldstein, I’m certain it would be the kind my father would approve of and respect. Until a couple of weeks ago, Robert was a fellow nominee for Performance of the Year in The Public Blogger’s “A Star is Born” competition. He was one of the first nominees I gravitated to because, in addition to his talent as an artist and writer, it was immediately clear that he was a man with a firm grasp on many of the virtues I respect. He is a humanitarian at heart, constantly offering insightful pieces and perspectives on what it means to be human — and how to stay that way in a world that often seems to challenge that notion.

So when I received the following message from Robert, I was especially honored:

Hi Ned, I have created the “Respect Award” for fellow bloggers who consistently reach out to other bloggers, offer support, are kind, struggle to understand differences in people, and who treat themselves and other people with kindness and respect. This is my way of saying thank you.

You have earned my respect.

What are the rules for the Respect Award? Recipients don’t have to do anything for this award. They can choose to copy the award art created by Robert and pass it on to people who have earned their respect — or they can do nothing. The only requirement has already been met when the award is given: Being someone worthy of respect.

Though Robert is no longer in the competition, having discovered him and his work through it is something I will take away with me long after the winner is announced at the end of December. The fact that I can call him a friend makes me proud; the fact that I have earned his respect would make my father proud.

And the fact that Robert’s handshake is unquestionably a firm one goes without saying… and one I hope to share in person some day.