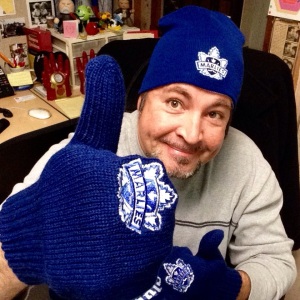 I have several good blogger friends who are Canadians. I realize that many of you are now slowly shaking your head with that “I told you so” expression.

But I really try not to judge people or their cultures, no matter how strange or foreign they seem to me.

For the record, I have friends from southern California, too.

But let’s get back to Canada, where my friend and humour (see how I spelled that?) blogger Randall Willis resides. In Toronto, Ontario actually. I’d give you his exact address but it resembles the coordinates for a Space Shuttle landing. I’m not sure why Canadians use all those numbers and letters, but I’m guessing it has something to do with the metric system. All I know is it would take me longer to put the address into my car’s GPS system than it would to drive aimlessly until I found him by accident.

Anyway, a few weeks ago we decided to have a gift exchange of sorts; I sent him a copy of my book in exchange for a “Canadian care package.” I say a few weeks ago because, as I mentioned, it was for Christmas, and would take me a week just to write the address on the package. After three ink pens and approximately nine feet of numbers and letters wrapped around a 6×6-inch package [I’ll say it for you: “That’s what she said!”], I sent my gift on its way. 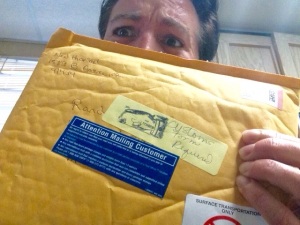 I’m pretty sure I’m on the Homeland Security radar now. Thanks, Randall…

My package was returned with a scary “finger-pointing” sticker, a big circle with a red line drawn through a package, and a notice asking for Customs Forms. Despite being a syndicated columnist, I have managed to live my life in relative anonymity in regards to any government agencies not having to do with liquor or voting — which, I should mention, will likely go hand-in-hand for many Americans during the next presidential election. But thanks to my Canadian friend, I’m pretty sure there’s a file with my name on it sitting on the desk of a disgruntled FBI agent with a dislike of humor columnists.

Still, I filled out the proper paperwork and resent my package to Randall even though I’m pretty sure someone was following me.

Today, I received a large package with a return address that appeared to be a mathmatical equation for infinity.

“Randall’s completely harmless and non-terrorist package has arrived from our neighboring ally country of Canada!” I said loud enough for any spies to hear. I then read the address out loud figuring anyone listening would either fall asleep or tune out after the first 10 minutes.

I opened the package and began removing its contents…

Note: One size fits all, even if it’s metric!

Their love of hockey…

I have to admit, there is a likeness. At least around the hockey stick.

If not for my understanding of proper punctuation, I might’ve been worried I had Marlie’s scarf.

The more items I pulled out of that package, the more I realized the danger I was in… 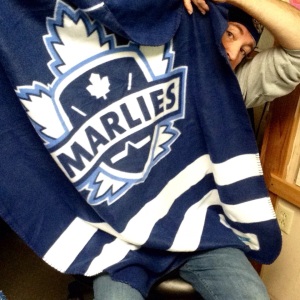 Talk about big things in tiny packages! [If my wife is reading this, please do not comment]

A pen hockey stick! Those Canadians have EVERYTHING!

This should help me stay under the radar.

So for those of you who may be contemplating having one or more Canadian friends like my friend Randall, keep in mind it will likely draw a few stares. Possibly even some unwanted attention from Homeland Security. But don’t let that keep you from reaching across the border.

Just keep in mind they may hand you a hockey stick.

And thank you so much, my friend…

He is also now a Toronto Marlies hockey fan