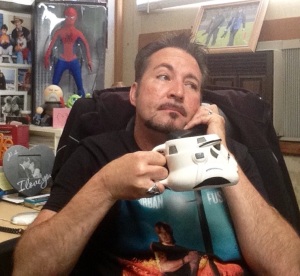 Over the last several weeks I’ve had a lot of bloggers asking how I got started as a columnist. Perhaps it’s because of the new year and resolutions made by writers to persue their goals of publication. Or perhaps they have been drinking and, in a moment of weakness, stumbled onto my blog. Which might explain why most of the messages I received asking for advice went something like this:

“Are you drunk or sober when you write? And how do I get started?”

Because I’m assuming they already know how to get started drinking, I thought I’d share the process I went through in becoming a syndicated columnist. Because this is a PG-rated site, I will leave out the extreme nudity, profanity and gratutitous violence that accompanied my rise to the somewhat moderately wellknown columnist (within a seven-mile radius) that you see today.

Let me begin by saying that when I first started querying newspapers about carrying my column, I was getting one or two rejections in my email box every week. In frustration, I turned to the Internet and discovered, with a little planning and organization, I could be rejected by every newspaper in the state of Louisiana all in one afternoon. 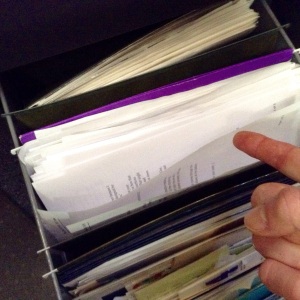 In 2002, I began my unofficial “Internet promotional tour” across the United States by emailing a basic cover letter and a few sample columns to newspapers here in my home state of Oregon. Today, the column is running in 60 papers in 11 states and somewhere in Canada. No one is exactly sure where. What follows are a few simple truths, mixed with some suggestions, that will help distinguish your email query from the hundreds of male enhancement offers editors receive each day.

What you gain, of course, is more queries in less time, without the expensive postage.

Why wait weeks for rejection when you can have it within minutes at no extra cost?!?

Which brings me to my second point: Developing a tough skin isn’t nearly as important as keeping a clear perspective on things. The fact is, even the best query can go unopened by a prospective editor, particularly if the timing is bad, and your query arrives the same morning the feature writer quits after being attacked during an interview with “The Neighborhood Cat Lady.”

It’s for reasons like this that going through long periods without a response shouldn’t be taken as a reflection of your writing ability. Neither is getting multiple rejections.

However, multiple rejections written in all-caps could be cause for concern. 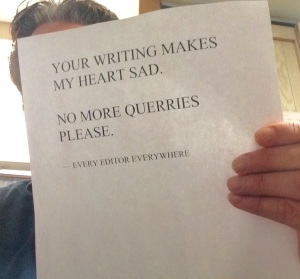 By now you’re saying to yourself (a) This guy might actually have some useful information, or (b) I think I remember deleting his query letter. Either way, we’re ready to begin talking about the specifics of formatting your email query.

• Create a cover letter: Your letter should be limited to a single page, shorter if possible. If it can be summarized using only bar code, all the better. Just make sure it includes three things: 1) A simple introduction, 2) Why you are querying and, 3) any information that gives your column merit, such as any writing awards, the number of papers currently carrying your work, or, if you’re just starting out, a complimentary lottery scratch-it potentially worth millions.

Next, in the upper left corner, include the editor’s full name, the publication name, and general mailing address.
For example:

This will make your query seem less like spam or a mass mailing and improve the chances of it being read. Next, in the actual greeting, use the editor’s first name. In this case,

You’ve already addressed them by full name and title in the upper left corner. There’s no harm in breaking the ice a bit in your greeting. If that annoys them, chances are they aren’t going to be interested anyway.

Finally, close your letter the way you opened it — on a first-name basis:

I look forward to receiving your rejection letter.
Sincerely,
Ned

Below that, put your full name, newspaper (if applicable), and general address:

Once you’ve created your cover letter, save it in your e-mail “drafts” folder. That way, when you’re sending out queries, you can just copy and paste your letter to each editor.

Remember: Whatever you do, don’t forget to change the name and greeting. I once spent an entire afternoon emailing queries to newspaper editors all over Rhode Island only to discover I had forgotten to change the name. For a short period, there was a rumor going around that every editor on Rhode Island was named Biff Rogaine.

Nowadays, editors will automatically delete any email that comes with an unrequested attachment. Because of this, the best way to get your work in front of editors is to include a “hot” link. And to clarify, by “hot” link I don’t mean Louisuana sausages or anything that could take you to an inappropriate Internet site.

A link can also include a bio page, awards page, etc. My suggestion, however, is to stick with your best work on a blog or website. If they want to know more about you, they’ll ask.

• The dreaded “subject” box: I’ve experimented with several options, including “Desperately Seeking a Benefactor,” “Congrats on the Promotion,” and “This Isn’t a Viagra Ad.” I eventually settled on “Humor Column Query.”

Editors will appreciate you being up front with your subject title and, as a result, will be more likely to take a look.

• Bookmark a newspaper website listing: There are lots of sites that list state-by-state newspaper websites. The one I used was U.S. Newspaper Listings. This site lists each state, which you can then click on for a complete roster of current newspapers available on the Internet within that state.

When you get to a newspaper website, find the Contact or About button. From there, you can generally find your way to the staff directory and the appropriate editor which, in most cases, is the Features editor for larger papers, or just the Editor or Managing Editor for smaller papers. Click their name, paste your cover letter in the text box, change the appropriate information — double check your info — and push “send.”

Querying your column over the Internet is a lot like playing the slot machines; most of the time you’re going to come up empty, but as long as you don’t run out of quarters — or in this case, persistence — odds are you’ll hit the jackpot from time to time.

(Have more questions about writing? Or just life in general? Email me at nedhickson@icloud.com.)

73 thoughts on “How I got started as a columnist (or, Why the suicide rate among editors has risen)”