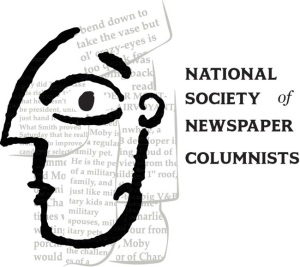 Being a writer is weird.

Most people, given a choice between writing a 200-word essay or being taised in the bare buttocks, would drop their pants before you can say “It was a dark and stormy nigh-AAAAAggghhh!”

Particularly in today’s faced-paced, text-speak oriented world of social media shorthand, the thought of spending hours toiling over words in order to convey an idea, feeling or moment is — in the words of Master of Horror® Stephen King — “A little creepy. But I like it.”

Several years ago, I let my membership to the National Society of Newspaper Columnists lapse. As a result, publishers stopped taking my calls; I entered into a period of writer’s blockage similar to eating a two-pound brick of cheddar; thousands unfriended me on Facebook; I burned my pizza; the list goes on.

Ok, fine. None of that happened, although I did burn a pizza.

Coincidence? We’ll never know for sure.

In all seriousness, it wasn’t until I renewed my membership this year that I realized the benefit of having insights and perspectives from other writers going through the same experiences I was. It’s the kind of support network we all need while pursuing this creative endeavor that those who aren’t writers often don’t understand. In fact, I was so inspired by my own membership that I offered to be the NSNC’s new membership chairman (before they could reconsider or sober up after the convention.) One of my responsibilities is to increase membership. This isn’t something I would normally do because 1) I’m not much of a joiner, 2) I don’t like “selling” things and 3) I really need to keep an eye on my pizza.

In this case, however, I was happy to do it because I’ve seen the benefits — for myself as well as other writers — that come with being part of a group that speaks the same language. As anyone who follows my blog knows, I try as much as I can to help other writers find their voice, a sense of direction and the perspective they need to be successful — which is defined differently for everyone. Regardless of what that definition is, it seems to fit with NSNC because of the diversity of writers who make up its membership. Whether you are a columnist, blogger, editorialist or write Hobbit erotica, you’ll find other members who can identify with you (although, to be honest, most of our Hobbit erotica writers don’t want to be identified.)

If the NSNC was only for newspaper columnists, I wouldn’t be talking about it here, nor would I have become its membership chairman. It was the organization’s overall support of writers and bloggers that drew me back in — and inspired me to reach out. In addition to having that support network, there’s also a monthly newsletter with articles written by members about how to improve your craft, industry news, information on contests, and more; access to all NSNC social media sites for members’ latest posts; eligibility in the NSNC’s annual writing contest for columnists, bloggers, digital media, etc; and partnership with groups like the Erma Bombeck Writers’ Workshop, National Press Club, National Lesbian and Gay Journalists Association and the NSNC Education Foundation, which provides scholarships for aspiring college columnists each year.

Oh, and you get a cool badge to post on your website, blog or social media page letting others know, for all intents and purposes, that your are way cooler than they are.

My apologies if that last paragraph sounded like a sales pitch, but I think the most misunderstood thing about the NSNC is that it’s some kind of club only for established, snooty newspaper columnists.

I bring this all up because the deadline for 2017 membership is Dec. 31, and I would love to see many of you with NSNC badges on your blog come January… or possibly even wearing them as full back tattoos. Either way, I hope you’ll consider joining me as a NSNC member for the coming year. If you’d like more information or are saying to yourself, “Ned’s post is so compelling I must join RIGHT NOW!” you can click on the icon below.

Or, if you have any questions, feel free to email me at nedhickson@icloud.com

Heck, maybe we can even get a tattoo together?