A blogger friend named Randall Willis once posted a beautiful poem that I’m always reminded of this time of year. In his poem, he used snow as an analogy for the magic that is constantly swirling around us — and how, like snow, it can quickly melt away and go unnoticed unless we make an effort to see it. What follows is a Christmas tale based on a true-life experience that I tell each year around Christmas. It’s a mixture of fact, whimsy, hope and my belief that a heartfelt wish is the cornerstone of life’s most important magical moments. 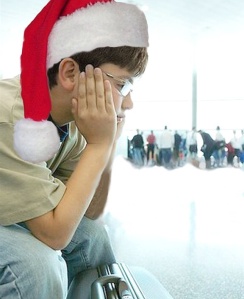 “I said gifts for the immediate staff only. That means Carl, Jody, Jessica and what’s-her-name — the gal we hired last month,” he instructed, keyboard clattering continuously. “Yeah, her — Loni. But that’s it. I never said anything about the sales department. What? Of course you’re included with the immediate staff. Get yourself something.”

Does your Dad know that? I wondered, but nodded without comment, deciding instead to change the subject. “Did you see Santa this year?”

The boy withdrew into the chair, suddenly interested in the large, red zipper running along his backpack. He traced it with his finger, averting my gaze for a time before finally whispering, “Only Santa can know…”

(Note: The next part of this story is pure speculation, based on a hastily spoken eyewitness account. And a handwritten note bound for the North Pole…)

Still talking into his Bluetooth, Alex’s father emerged from the restroom stall and squirted soapy gel into his hands.

Next to the postmark, the image of a mittened hand pointed to the words “Return to Father.” He studied it curiously, then flipped it over and noticed his son’s name above the return address.

Uncertain, he rubbed his chin. “It says ‘Return to Father,’ and that’s me, so I guess I should, huh?”

Wordlessly, Alex’s father refolded the note and carefully slipped it back inside the envelope, then absently stuck it into his coat pocket. As he left the restroom, a muffled voice could be heard emanating from his headpiece — which was now in the trash. Mr. Riley made his way back through crowd to the terminal, his footsteps awkward and uncertain. As if retracing a once-familiar path that had become neglected and overgrown.

Over the loudspeaker, boarding calls for Chicago had begun.