During my mini book tour to Watsonville, Calif., a few weeks ago, it became apparent that even as a 49-year-old I still have the directional sense of a standard windsock.

If not for the GPS system in the rental car, I would probably be outside of Reno looking for an on-ramp to Sacramento right now.

It’s a disorder many famous historical figures also suffered from, including Christopher Columbus, who discovered America completely by accident while looking for — if memory of sixth-grade history serves me — a faster trade route to WalMart.

I’m the kind of person who must enter and leave somewhere the same exact way in order to keep from getting lost, even if it means walking backwards out of a public facility, such as the men’s room at Safeco Field. I’ve actually had nightmares about being a contestant on The Amazing Race. In it, I am partnered with my friend David, who spent six years in the Marines and therefore still refers to distances as “clicks” — a unit of measure based on kilometers and the use of a special clicking device. Were I trying to find my way out of enemy territory, this device would be about as useful to me as, say… 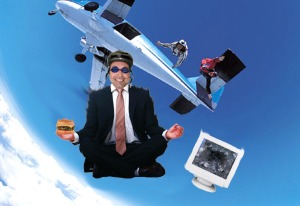 If hurling your computer to Earth while skydiving brings you inner peace, you might be an IED sufferer.

Hello and welcome to a special edition of our in-depth medical feature Health Yak, which has been recognized by the U.S. Surgeon General as “extremely topical,” meaning that you should not attempt to ingest any portion of this column without first consulting your doctor.

Today we will be discussing a study that suggests as many as 16 million Americans — or roughly the number of people who never receive their appetizers during an average season of Hell’s Kitchen — suffer from periodic outbursts of anger.

I know what you’re thinking: What makes this different from a typical outburst of anger, like when I open the air vent in my car and release a cloud of spores the size of shiitake mushrooms?

The answer, of course, is that there is no difference, at least not until someone funds a clinical study, at which point it becomes an official “disorder” treatable by a new drug with minor side effects, such as having your liver grow to the size of Shaquille O’Neal’s seat cushion. END_OF_DOCUMENT_TOKEN_TO_BE_REPLACED