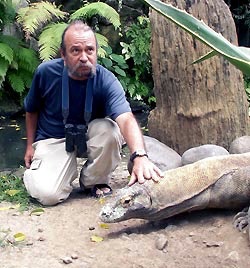 Any guesses why he’s missing part of his middle finger?

Some of you may remember when San Francisco Chronicle executive editor Phil Bronstein was attacked by a 7-foot-long Komodo dragon back in 2001. Oddly enough, it wasn’t a letter to the editor gone horribly wrong, or even a marketing stunt for “Crouching Editor, Hidden Dragon” that spurred the attack. It actually happened during a special behind-the-scenes tour at the Los Angeles Zoo aimed at rewarding high-end financial contributors.

As a result, officials were forced to “re-evaluate” the special visiting privileges reserved for major donors — and without question, feeding yourself to a seven-foot lizard definitely falls into the “major donor” category.

More than a decade later, zoos are still struggling to find ways of rewarding major donors with experiences that, as one zoo official put it, “Offers a unique and exciting interaction with animals that doesn’t include offering our donors as dinner.”

The problem is, while there are certainly lots of other, safer animal exhibits that could be toured by big spenders, the danger factor — and storytelling value — drops off considerably once you leave man-eater realm. Being at a dinner party and telling how you stared down a Siberian tiger, then narrowly escaped its claws, is definitely more impressive than recalling the time you held off a hungry Toucan with nothing but a tranquilizer gun and a box of Fruit Loops. END_OF_DOCUMENT_TOKEN_TO_BE_REPLACED