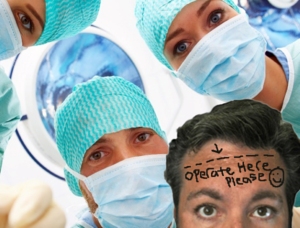 Doctors appreciate when you are helpful, especially if you can lend a hand with your own surgery.

When he was supposed to operate on, say…

Or even someone else’s big toe.

That’s right; in a few cases, doctors have even operated on the wrong patient. However, the report strongly emphasizes that THIS IS VERY RARE, and only occurred when doctors didn’t have the right patient to begin with:

“Let’s see, according to this chart, Mrs. Freemont is 68 years old and is here for a triple by-pass. Nurse, please shave away that thick hair on her chest, right below her Hell’s Angels tattoo.”

“Doctor, are you sure this is the right patient?”

“Absolutely, it says so right here on her chart.”

“To the untrained eye, perhaps. But if you’ll lift up her hospital gown you’ll see…HOLY COW!”

“This is going to be more complicated than I thought…”

The organization that conducted the study, which was headed up by Dr. Dennis O’Leary, says there are a number of reasons “wrong-site surgery” has increased in recent years. According to Dr. O’Leary, “Doctors are busy, and people are being put to sleep before there is an opportunity to verify who they are, what procedure is going to be performed on them, and on what site.”

What this means, of course, is that you should always insist on staying awake long enough to meet your surgeon, and, if at all possible, scrub in for the operation itself.

For situations when that isn’t possible—such as assisting with your own brain surgery, it’s a good idea to write out a list of instructions that you can keep with you at all times.

These instructions should include: Your name, the type of operation you’d like to have, and what part of your body you’d like it to happen on.

Hello.
My name is Ned.
I’d like to have brain surgery, please.
If possible, I’d like it to happen on my head.
(Please see arrows)

You should know that the surgery which holds the greatest risk to patients is orthopedic surgery, which involves operating on the arms and legs, and therefore increases possible confusion between right and left:

“Okay, let’s open up that right arm…Wait a minute. Is it supposed to be MY right, or HIS right?”

“Let’s see…if I turn this way, that would make it my right and his left—right?”

“That’s true, doctor, but what if it’s your left.”

“You’re right! Let’s try flipping him over, and then we can…WAIT! He’s clutching some instructions…”

I should mention that out of the estimated 40 million operations performed in the U.S. last year, only 58 resulted in “wrong-site surgery.”

I should also mention that none of them were fatal, and that all of them happened to Joan Rivers.

As you might’ve guessed, the results from this study have prompted hospitals to find ways to reduce the numbers of “wrong-site” incidents that occur each year. While I’ve had a chance to read over some of the suggestions, I’m going to refrain from including any of them here—just to avoid stepping on any toes.

Especially if they happen to be my doctor’s.

(You can write to Ned Hickson at nhickson@thesiuslawnews.com, or at the Siuslaw News at P.O. Box 10, Florence, OR 97439)

202 thoughts on “Surgery is safer when patients come with instructions”