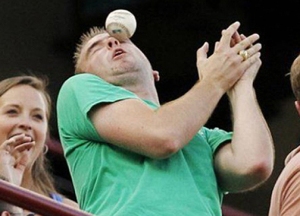 Even keeping my eye on the ball wouldn’t help much.

Yesterday, I had my first baseball practice in 30 years. It was with a group of guys with names like Chico, Blaze, Rip, and Easton — guys who even sound like baseball players.

My name is Ned, which is why this morning I am so sore my nostrils are the only part of my body capable of responding — albeit only to simple verbal commands such “Flare” and “Sniff.”

For this reason, I’d like to apologize in advance for any typos you may find in this column. Please keep in mind it was typed using only my nostrils, and a dried lima bean that was strategically dropped onto the appropriate keys through a combination of sniffing and flaring.

I should also mention the Spellcheck feature on my computer requires holding down the SHIFT key while simultaneously pushing F-12. Although I tried, I was unable to execute this function successfully before dislocating my tongue — which is actually easier than you might think.

Especially if your tongue becomes pinched between two keys and, in an attempt to dislodge it, you begin swinging the keyboard from side to side until you are knocked unconscious.

Let’s face it: given my athletic background, I have no illusions about being a great player. I’m 46 and have a grand total of one year of organized baseball experience. That experience came when I was 10, while playing on a team called The Giants, which was quite possibly the worst team in the history of little league baseball.

We had nicknames like “Squint,” “Waterboy,” “Strike,” and “Phlegm.”

I remember these names because they were at the top of the rotation. Our only win of the season came by way of forfeit when, after witnessing Phlegm blow a large mucus bubble, the other team was too nauseous to continue.

This season, taking into account my lack of athletic talent, fundamental skills, conditioning and — according to our coach, a league a rule prohibiting the use of oxygen tanks anywhere on the field — I’ve tried to set realistic goals for myself this summer.

Here are a few examples:
1) Realistically, I should be able to run all the bases in 15 seconds, as long as it doesn’t have to happen in a single game.

2) Realistically, by the end of the season, I should be able to catch a fly ball; next year, I’ll try for two.

3) Realistically, I should be able to stop thinking of my athletic cup as a bull’s-eye, and therefore overcome my fear of getting hit in the groin on a line drive from someone nicknamed “The Sterilizer.”

4) Realistically, number three is never going happen, but I’ll learn to deal with it.

5) Realistically, I will have to stop blaming pretend gophers every time I miss a routine grounder; eventually, I will need to bring in real gophers.

6) Realistically, I should be able to hit a home run if I work on my fundamentals and eventually execute them in a game where, in one unforgettable moment, the entire outfield is swallowed by a giant sinkhole.

By setting achievable goals like these, I can measure my progress and hopefully contribute to our team’s success.

On the other hand, it doesn’t mean I don’t have a back-up plan. I’m not going to tip my hand to the opposing teams by getting into the details here.

But Phlegm, if you’re reading this, please give me a call.

(You can write to Ned Hickson at nhickson@thesiuslawnews.com, or at the Siuslaw News at P.O. Box 10, Florence, OR 97439.)