So you want to be an astronaut!

OK, neither do I. But suppose we did. And let’s suppose I didn’t routinely freak out anytime I’m launched higher than a pogo stick. Then we would all be very 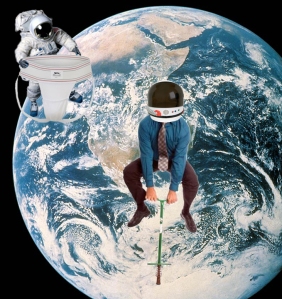 excited about all the recent advancements in the area of private spaceflight. Even now, it is possible for us to take a “slingshot ride” to the edge of the atmosphere and back, providing adventurers like ourselves with a breathtaking view of the earth, a few minutes of weightlessness, and, hopefully, at least one change of underwear.

You’ll notice there are quotation marks around the phrase “slingshot ride,” which is the actual term one expert used in describing the flight so that people like me, with no aeronautic experience, could picture themselves being flung headfirst into the stratosphere by something resembling a giant jock strap.

This, of course, would never happen.

At least not in the U.S.

Thanks to the FAA, we can rest assured that any flight heading into the cosmos will first have to meet the same rigorous federal safety standards set by The Jetsons 50 years ago. Knowing this, spaceflight entrepreneurs have spared no expense in designing flight packages cool enough to justify the $98,000 per-person price tag, which includes a disposable flight suit and wacky souvenir vomit bag that reads: Sack launch.

So far, the front runner in this fast-growing industry is Space Adventures of Arlington, Va., which claims 100 would-be astronauts have already made large deposits — which I’m assuming means currency. If that’s the case, then we’re one step closer to realizing the ultimate space adventure: An orbiting hotel.

I know what you’re thinking.

You’ve seen the luxurious accommodations of the International Space Station, and for $50 you can have the same experience by locking yourself in the bathroom of a Greyhound bus traveling between Jackson, Miss., and Scottsdale, Ariz.

However, in this case, we’re talking about a $500 million “cruise ship” capable of carrying 100 passengers and 50 crew members into orbit around the moon! Imagine the excitement of being aboard the largest, most luxurious space ship ever built! Imagine being among the first passengers as it departs on its historic maiden voyage! Now imagine do that WITHOUT thinking about the Titanic!

Fortunately, there is another way to experience a trip through the cosmos without actually leaving the ground. And, no, it doesn’t require a six-pack and a copy of Disney’s Fantasia. As you might’ve noticed, Russia’s space program has been a little slow lately. So slow, in fact, that no one realized there was a cosmonaut still orbiting in the International Space Station until, by chance, his video transmission was picked-up by the WB channel as a mid-season replacement for failed reality TV show, Singing Bachelor Apprentices Who Can Cook.

Thanks to this discovery, Russia has now begun offering action-packed cosmonaut training packages, which include everything from MIR space station simulators, to learning how to navigate by the stars, to spacewalk training, to an actual real-life cosmonaut rescue mission!

To be honest, I’m a little suspicious about that last one. Especially after they showed me my pogo stick.

20 thoughts on “Your space adventure awaits! And mine will just have to keep waiting”