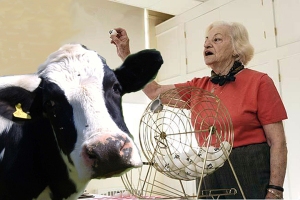 As you probably know, national “Be Kind to Animals Week” is almost here. And just when Florida was beginning to re-gain a small measure of respectability by working hard to draw absolutely no attention to itself, it is once again in the national spotlight.

I’m talking, of course, about the controversy surrounding Cow-Patty Bingo.

For those who might not be familiar with this activity for reasons of sanity, we’ll just take a moment to cover the basics.

First, you need a cow.

OK, not really. But you really do need a cow, preferably one that has just eaten a lot of fiber — like, say, a 55-gallon drum of granola. Next, you need a large field or yard (such as a neighbor’s) that can be divided into numbered grids. Once you have the cow and the grid, it’s time to start selling squares. This requires finding people who think that poop is entertaining. If you know anyone who watched Jersey Shore, that would probably be a good place to start.

The rules to Cow-Patty Bingo are simple. Each square is numbered and sold for $5 each, and you can buy as many squares as you like. Keep in mind, however, that the more money you spend on squares the less you can spend on beer, which is something you’ll need a lot of in order to cloud any memory of yourself standing in the bleachers screaming “POOP IN MY SQUARE!”

It’s also important to note that, in order for a “drop” to qualify, it must be deemed “clearly visible” by the judges. This is actually a lot harder than it sounds. That’s because, in order to prepare for this level of scrutiny, judges, on average, consume twice as much beer as spectators at these events.

OK, now that we’ve covered the basics, it’s time to talk controversy. According to an article sent to to me by Jack Ortiz of Reedsport, Ore., a recent Cow-Patty Bingo fund raiser held at Florida Southern College became the target of protests from PETA (People for the Ethical Treatment of Animals) which said, and I quote: “Cows are adversely affected by laughter.”

(I should clarify that PETA was referring to human laughter, and not cows getting laughed at by other cows. I should further clarify that, as far as cows are concerned, the poop thing just isn’t that funny anymore.)

Furthermore, Amy Rhodes, a caseworker for PETA, strongly denounced the college’s participation in Cow-Patty Bingo, saying that it was “A dangerous message to send to kids.”

I completely agree with this, and can see how prolonged exposure to this type of activity starting at an early age can only lead to one thing — and that is retirement and REAL bingo.

While there are certainly no easy solutions to the growing controversy over Cow-Patty Bingo, I think finding some common ground would be a good place to start. From there, we can finally move forward.

Just as long as everyone watches where they step.

57 thoughts on “Laughing at cows can be harmful, especially while playing bingo”