(It’s Sunday and a time for reflection, unless you’re so hung over it hurts to look in the mirror. It’s also the time we dig deep into the archives during another Flashback Sunday, revisiting a column or blog post from the days back when I thought “Freshly Pressed” was a site for French press coffee snobs…) 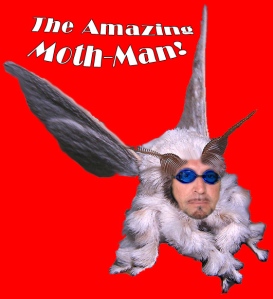 I still live in fear of being bitten by a lame radioactive insect, like the newly discovered “Poodle Moth.” (goggles are optional)

For most of us, there comes a time in our lives when we must face the truth, and accept the fact we will never actually possess any type of super-human powers. This includes the ability to fly, shoot laser beams out of our eyes, or look good in a skin-tight costume.

As a child, I spent countless hours thumbing through comic books and dreaming of the day I would be bitten by a radioactive insect — and knowing full well that, with my luck, it would probably be something stupid like a moth:

“Curses! It’s Moth Man, here to foil my evil plans! HOW CAN I STOP HIM? Hey — maybe I’ll try this porch light…”

In fact, I was so sure that I would end up as a lame super hero that, with the help of my friends, we came up with a plan to MAKE me into “Spider-man” before there was any chance of me being bitten by a radioactive moth, ear wig, silverfish or stink bug.

Our plan was simple.

Step one: Find a spider — preferably a small one — and expose it to high levels of radiation.

Step two: Make it bite me.

Now, finding just the right spider proved tricky. That’s because there were certain genetic traits that I did not want incorporated into my DNA. For example, really hairy spiders were out. So were those spiders with the big squishy bulb in the back. Maintaining a secret identity was going to be crucial, and trying to do that as a seven-year-old with a giant rear end and thick body hair would be nearly impossible

After eventually capturing the perfect spider specimen, it was time to expose it to high levels of radiation. This, of course, meant gaining unfettered access to the most potent source of radiation at our disposal: The microwave oven.

Since there’s a good chance that many of you are actually reading this at breakfast, I’ll spare you the details and just tell you that I never ate out of that microwave again. I also never gained any super powers. I did, however, gain an appreciation for the super powerful absorbancy of Brawny paper towels.

The reason I’m bringing this up is because of an incident last week that proves that there ARE those among us who aren’t willing to give up the dream of having super powers. According to a CNN report, a man entered a bank in Utah, walked across a lobby full of customers, and began taking handfuls of money from the vault without filling out a withdrawl slip — which he didn’t figure he needed to since he was completely invisible.

In fact, it wasn’t until being tackled from all sides by bank security and a mob of angry customers that he suspected his invisibility scroll, which he’d purchased from a “sorcerer” for $625, might not be working.

Though it’s true the incident ended badly for him, it’s a real positive for the rest of us if this is the direction that super villains are headed. Heck, maybe it’s time I pulled out my old Moth-Man costume?

Assuming it doesn’t have holes in it.

55 thoughts on “My greatest childhood fear? Being bitten by a radioactive moth”