No, that’s not a photo taken inside an empty office at Chernobyl. It’s what I look at every time I glance up from my desk in the newsroom here at the Siuslaw News. It is The Door (of Shame, Blame and Brilliance). As any reader of this weekly feature will tell you, it is a shrine, a journalistic Mecca, a print media Wailing Wall to which we make a pilgrimage each Tuesday and, with deep introspection, ask ourselves that eternal question:

How did THAT make it into print without someone noticing?!?

The Door has been a work in progress since the early 1970s, when journalists began taping examples of the best and worst headlines, typos, cutlines and correspondence to it as a way to 1) keep a healthy perspective on what we do, and 2) keep The Door from falling apart since the budget won’t allow for a new one. In addition to its significance as a sentinel of journalistic history, it also contains enough tape, paste and glue to withstand the blast radius of a backfiring 1967 Volkswagen Beatle.

Which brings us to this week’s entry. However, as always, we must first join hands and, in a monotoned voice similar to Kristen Stewart’s audition tape, repeat the following mantra:

Today, we have two examples of how a single missing letter can change the entire meaning of something otherwise well-intentioned. 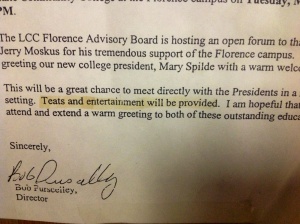 Our first piece is an open letter to the community, inserted into 6,000 copies of our newspaper, inviting them to attend an open house to meet the college’s new president.

Thanks to a slight typo, it was the largest turnout for an open house in school history…

Our second offering is from 1998, when District 10 Oregon State Representative Alan Brown sent a blanket “Letter to the Editor” to every newspaper in his district, thanking the voters for re-electing him to his position.

His closing paragraph — though certainly unintentional — could be one of the most truthful statements to come out of our state’s capitol in decades.

No wonder he got re-elected…

59 thoughts on “Already tired of Tuesday? Show it… The Door”