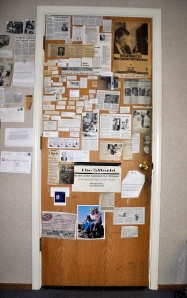 The Door in all it’s glory.

The above statement is more than just a flashy headline meant to hook you into reading this post. It’s a proven fact, based on a highly coordinated, in-depth poll taken over the course of three minutes here at the Siuslaw News.

I know what you’re asking yourself: Why not five out of five?

That’s because we actually only have four reporters in our newsroom. The fifth person in this poll isn’t “technically” a reporter because, technically speaking, he was already on the other side of The Door, jamming a plumbing snake down the commode. So, as a show of my journalistic integrity — and also because someone at the corporate office may read this and add more projects because of our “new five-person staff” — I couldn’t in good conscience claim 5-out-of-5 in my headline.

Just for the record, “Bo” the plumber did say he thought about being a reporter but decided against it because, as he explained, “Fixing toilets pays better and, unless the last person to use it ate alphabet soup, there’s no grammar to deal with.”

But you didn’t come here for that. Well, maybe that guy did. The rest of you came because it’s Tuesday; it’s the day we gather at The Door (of Shame, Blame and Brilliance) to highlight one of the many coveted newspaper clippings that have been assembled on The Door by reporters here at the Siuslaw News since the 1970s.

Before we begin, we must follow a certain protocol — a ritualistic show of respect if you will — that dates back as far as I can remember, keeping in mind that I am approaching 47. As always, let’s join hands and, speaking in a monotoned voice similar to any character played by Kristen Stewart, repeat the following mantra:

Unlike most clippings on The Door, this one has no date or newspaper credit, which leads me to believe it was clipped and posted by someone in haste. Or someone intoxicated.

Either way, it is unique because it encompasses two of our criteria: Blame and Shame. Undoubtedly, after this was published, the editor thought, “It’s totally shameful I missed the absolute stupidity of this headline… Hey, I’ll blame the copy editor!”

I think I actually saw this guy. Sadly, I thought he was just shooing flies…

Join us again next Tuesday, when we will once again stand before The Door and ask: Are these clippings the only thing holding this door together?

60 thoughts on “Before leaving the newsroom, four out of five journalists recommend using… The Door”