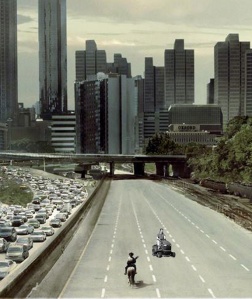 After years of creating ad campaigns for high-profile companies like Coca-Cola, a good friend of mine in Atlanta has decided to do what many successful advertising people do when they reach that point in their careers where they can simply LOOK at a new product and, without any hesitation whatsoever, begin to vomit:

And that, of course, is to go into the lawn care business.

Like some of history’s most successful entrepreneurs, Fred spent time studying his new market, its trends and the competition before assembling a detailed business plan, which he described as follows: “I bought a lawnmower.”

On the surface, this may not sound like much of a business plan. But as Fred pointed out, what sets him apart from other lawn care enterprises around Atlanta — aside from his limited grasp of Spanish — is the TYPE of mower and equipment he’s using. While other lawn care enterprises utilize gas-powered equipment and emit enough exhaust smoke to divert air traffic as far west as Alabama, “I use manual-reel mowers, electric gear and hand tools in order to reduce emissions and promote more responsible, planet-friendly yard work,” Fred explained.

I considered this for a moment — this idea of promoting more responsible, environmentally-conscious yard work — before responding with, “Hahahahahahahahahahaha!”

“No, really,” said Fred, who cited an EPA study that stated that a piece of gas-powered lawn gear actually creates more pollution than a car.

“Unless it’s a Gremlin,” he quickly added.

When I considered that it usually takes a full hour for the lawnmower smoke to leave our yard (a process I sometimes hurry along with a leaf blower), I realized he could be right. On any given weekend there are at least a dozen people around our neighborhood mowing lawns, edging grass, using gas-powered weed eaters, burning yard debris and branches (and occasionally portions of their fences and/or shrubbery), then tidying up with leaf blowers the size of a Lear Jet engine. After which they take a moment to enjoy their handiwork by — what else? — smoking a cigarette.

Somehow, I have become desensitized to all of this, and the fact that our Labrador has passed out three times in the last month while relieving himself in the front yard on mowing days. Possibly for periods long enough to cause permanent brain damage.

Sadly, we’ll never know how much damage because, as I mentioned, he’s a Lab.

I told Fred he was on to something big and asked how the business was going. He admitted he had miscalculated and started too late in the season. As a result, “MowGreen” hasn’t really taken off yet despite an aggressive ad campaign.

“Plus, I think most of the fliers we put around the neighborhood ended up in the portable toilet at a construction site down the street,” he said. “But hey, we used recycled paper, so at least we’re still having an impact on the environment in the end.”

Fortunately, because of his years of experience in advertising, Fred saw the need to diversify his marketing campaign in order to keep it from…

Well, going down the toilet.

In addition to creating his website to explain his services and communicate with clients, he also came up with a high-profile promotional plan to spread his idea of “planet-friendlier” lawn care by offering a free mow to the first celebrity who asks.

“As long as it’s within driving distance,” said Fred. “If it’s really far away, they’ll have to split the gas with me. And possibly let me sleep over. (Note: This offer excludes Joan Rivers.)

In the meantime, Atlantans, when you think of lawn care I hope you’ll support the environment by thinking of Fred.

Unless, of course, you’re in a portable toilet.

(Ned is a syndicated columnist with News Media Corporation. Write to him at nedhickson@icloud.com, or at Siuslaw News, P.O. Box 10, Florence, Ore. 97439)