(If you know what today is, raise your right hand. Great! If you know what we do here each Sunday, raise your left hand. Fantastic! Now, with both hands in the air, walk to the medicine cabinet and take your medication — because if you believe I can actually see what you’re doing, there are more important things you need to deal with than reading today’s Flashback Sunday. For the rest of you, it’s time once again to delve into the Flashback archives, back to a time when all comments left by readers started with “I am liking your site very well!”; back when I made the empty promise of a free kitten to every new follower; back to a time when I thought “Freshly Pressed” was website offering the latest weight lifting records…) 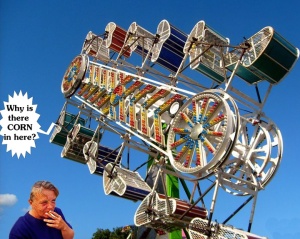 I have a basic rule of thumb when it comes to carnival rides: If the person running a ride, such as the Squirrel Cages, keeps a garden hose available for spraying out the seats, I stay away.

That’s because this person’s sole ambition is to make me — and others like me — vomit. I realize this person may be a trained professional who, on a daily basis, makes countless split-second decisions on whether to push the red or green button to stop the ride. And, yes, I realize this individual has nothing but the safety of his passengers in mind when he secures a safety latch by removing his boot and whacking it until his arm gets tired, at which point, being a trained professional, he bolsters the confidence of his nervous riders by hacking up a cheekful of phlegm and shrugging his shoulders before walking off.

Yet somehow, in spite of these assurances, I’m still terrified of carnival rides. I think it’s because, when I was 10, my “friends” talked me into riding The Drop Out, which wasn’t actually a ride as much as it was a barf-a-torium with an observation deck. Basically, 30 people entered a circular room and found a spot along the wall. Gradually, the walls would begin to rotate faster and faster, creating enough centrifugal force to suck the cotton candy from the mouth of anyone standing within 100 feet. Once the ride reached optimum centrifuge, occupants would be stuck to the wall as the floor dropped out, leaving them suspended 20 feet above a pit of (presumably fake) spikes.

All of this was visible through a series of windows surrounding the ride so that, while waiting in line, people such as myself could prepare for the experience by, very slowly, having a bowel movement. I still don’t know how I got talked into this ride.

All I know is that I ended up next to someone whose stomach contents went on display the instant the floor dropped out. Due to the force of gravity, I couldn’t move my head without blacking out, which meant watching the sum total of this person’s food consumption — which was considerable — reconfigure itself on the wall next to me.

This was, without question, the longest ride of my life. To this day, I can still see the apologetic look on that person’s face as the ride came to an end and the three of us — him, his vomit and I — gradually slid down the wall together.

Since that fateful encounter I’ve had no interest in being strapped down, cinched up or buckled into something specifically designed to do things I wouldn’t normally do without a flight suit and full medical coverage. My son gets frustrated by this because he’s one of those people who is exhilarated by having his stomach in his mouth. The one time he talked me into riding with him was on the Squirrel Cages, where there was no chance of me flying out of my seat or getting vomited on. Everything was fine until that part in the ride when — and you know the part I mean — it starts to actually move.

Granted, I’m not a professional carnival ride operator, but I think I could recognize some of the subtle signs exhibited by a rider who is in distress. For example: Someone who is pressed so hard against the cage that his lips are actually outside the door while screaming “LET-ME-OFF-LET-ME-OFF-LET-ME-OFF!” would be a red flag to me. Particularly if the rider in question began doing this after traveling less than two feet. In my case, these signs were somehow missed by our ride operator.

I’m not saying it was all his fault.

Who knows, he might’ve been busy looking for a garden hose?

(Ned is a syndicated columnist for News Media Corporation. Write to him at nedhickson@icloud.com or at Siuslaw News, P.O. Box 10, Florence, Ore. 97439)

40 thoughts on “Impress your friends and family! Freak out on a carnival ride”