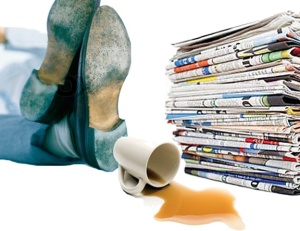 Yes, it’s true: Friday is finally here! And so is Ned’s Nickel’s Worth on Writing, both of which are awaited for with equal amounts of anticipation! Just like French toast and mustard; your favorite TV show and a power outage; or a great hair day and tornado warning. Why so much anticipation? Because this weekly feature on writing, culled from my 15 years as a columnist and presented to readers for a mere nickel, has been referred to by Consumer Reports as “worth every penny, unless it’s Canadian.” That’s right. Many of today’s most influential writers got their start right HERE. Or at least in this general vicinity, most definitely somewhere on the planet. Here’s what some of them have to say… (and by “them,” I mean some of the greatest fictitious writers of our time):

“I set my clock by his post. Without it, I wouldn’t know when my Matlock reruns come on…”

“Each week, he offers an oyster with a pearl inside. And each week I say to myself, ‘shuck it.'”

“If you have writing questions, Ned’s Nickel’s Worth has answers. Just not about writing…”

The accolades go on, but enough of that! Let’s get to this week’s edition of Ned’s NWOW, brought to you by this yesterday’s coffee, today’s deadline and my friends at Gliterary Girl, where my NWOW also appears each week. At least until they change the passcode…

Regardless of what you may think after reading one of my columns, one of the strangest experiences I’ve ever had as a writer didn’t take place at the keyboard.

It actually occurred in a beauty parlor.

The woman I was interviewing was sitting under a hair dryer throughout our conversation, which meant we had to raise our voices the entire time. Naturally, this drew more than a few stares from other patrons getting perms, waxes and pedicures. While I’m sure some of the stares had to do with the fact we were practically yelling for 40 minutes, I think it had more to do with the nature of our conversation: The woman, named KK, was sharing her experiences as a homicide detective.

A lot of it wasn’t pretty. But it was raw, real and included the kinds of details you can’t get from reading about things. The smells, physical evidence, procedures that aren’t “by the book” but utilized and recognized by working detectives — all of it was there, presented from the source during one of the most surreal conversations I’ve ever had. It’s where I learned about pattern lividity, and how, in one case, the deep bruising of a Lone Star belt buckle was uncovered using ultraviolet light. Within hours, they had confiscated the belt from the suspect’s home and matched it with the bruise found on the body of his nine-year-old stepson.

I said it wasn’t pretty.

So why was I there at that beauty shop? I mean aside from my need for a mani-pedi? I was getting background for a mystery novel. Although I knew my characters and had completed an outline, I needed the kind of details that not only add realism and plausibility, but are so compelling they can sometimes take your story in directions you hadn’t thought about. Even as a humor columnist, I use this same approach. The only difference is that most of my conversations are with myself. But you probably guessed that.

The point is, whether you’re a novelist or columnist, your research should include talking with people:

For a lot of writers, talking with people is like needing a cavity filled; you know it has to be done, you’re sure it will be painful, and you’d be willing to fill it yourself with wood putty. But writing about characters in a way that’s believable, and constructing a story that feels as if it follows a natural sequence of events — through conversation, observation and consequence — requires a working knowledge of your fictional world and those who inhabit it. To do that, you have to talk to people who live there.

As always, begin with the research and educate yourself as much as possible about the subject you’re fleshing out. Not only will this give you a better idea of the kinds of questions you need to be asking, it will keep you from wasting time asking about the obvious. Remember: In most cases you’ll only have one opportunity to speak with these people, so make the most of it by being prepared. They will appreciate it, and you will get more out of them if they see you’ve taken the time to cover the basics. If you’re interviewing a chef, you don’t want to waste time asking the correct temperature for meat sauce; you want to know the secret recipe.

When it comes to the actual interview, here are a few tips I’ve learned based on trial, error and forgetting batteries for my recorder:

1) Let them pick the interview location. You want them to be comfortable and in their element. That’s where they will have their best recollections and be more apt to reveal details. Although my interview with KK was in a beauty shop, it was her choice — and in a place she frequented. Plus it allowed me to get a much-needed trim. Which had nothing to do with the interview, but I’m just saying…

2) Use a small recording device and avoid a pad and pen. There are several reasons for this, aside from the fact that I can’t read my own writing. Eye contact is important during an interview — for you and your subject. Making eye contact with the person you’re interviewing encourages them and, at the same time, fosters a conversational approach. Again, make them comfortable and they will reveal more. For you, not having your eyes buried in a notepad allows you to observe body language and facial expressions — things that will come back to you when you begin writing. They also provide you with visual cues that can help lead the interview into different directions. Do they suddenly look uncomfortable? It may be time to take a different tact — or maybe dig deeper. You’ll know when you see it, but can’t if you’re looking into a notebook.

3) Use your list of questions sparingly. I think of them as icebreakers — something to get the conversation going or refer to if there’s a lull or dead end. Just like a great book reads well when it feels “unscripted,” the same applies to a good interview. Think of it this way: Want to tour the country? Stay on the main highway. Want to get away from the tourists and see the real America? Take the back roads and be spontaneous. That’s where you’ll find the people and places you’ll remember most.

And so will your readers.

Assuming they can hear you over the hair dryer…

(Ned is a syndicated humor columnist with News Media Corporation. You can write to him at nhickson@thesiuslawnews.com, or at Siuslaw News, P.O. Box 10, Florence, Ore. 97439)

19 thoughts on “If you want to be a writer, you really need to talk to someone”