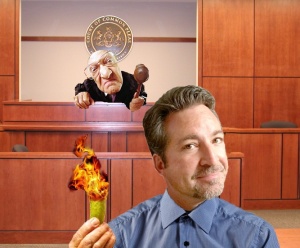 (It’s Flashback Sunday — but DON’T PANIC! Just because this post isn’t even remotely familiar is no indication you are experiencing the beginning signs of dementia! Actually, the fact that you read this blog at all is probably the best indication. Regardless, posts for Flashback Sunday are chosen because they 1) Have appeared as a newspaper column but not on my blog, or 2) were posted here long ago, back when all of my followers could fit into a two-door Mini Cooper — and did, often for no apparent reason…)

It wasn’t long ago that I found myself driving down the road with an 800-degree onion ring searing my flesh. I had just left a Burger King drive-through and, after exchanging pleasantries at the window and maintaining my composure long enough to exit the parking lot, pounced on my combo meal sack like a hyena at a gazelle feed — laughing and eating, laughing and eating.

So, when I ripped into an enormous onion ring and felt the breading fall away into my lap, I had no one but myself to blame when my appetizer became a sizzling, onion-flavored chin strap that turned my frenzied laughing to screaming on I-5. Though I had been branded a road-food junkie — apparent by the scarlet “O” encircling my lower lip and chin — I never once thought of calling a lawyer in an effort to seek damages against Burger King (and the onion growers of America) for supplying me the means with which to be an idiot.

As much as I’d like to say that I reached that decision based on my moral character, it really had more to do with a recurring image of what the trial would be like.

“Mr. Hickson, when you ordered your food at the drive-through, how did those combo-meal pictures make you feel.”

“Angry — Tortured, really. They seemed to be taunting me. I think I might have cried a little.”

(Dramatic pause by my lawyer) “So, it’s safe to say that, based on the fact that you were ordering food, Burger King should have known that you were hungry enough to risk bodily harm in order to satisfy your appetite.

“And yet they sent you out onto the highway with hot onion rings ANYWAY, knowing full well that you would probably try to eat them.”

“And is the girl who worked the drive-up window that day here in this court room?”

“Y-yes,” I say from the witness stand, and point incriminatingly to a 16-year-old wearing braces and a “Viva Loca” T-shirt. “If not for my quick thinking and throwing a super-sized cup of soda in my face, I might’ve been scarred for life because of that girl!”

The reason I bring up this painful subject is because of (another) lawsuit filed against McDonald’s by an Iowa woman who burnt herself on a hot pickle slice. According to the report, she is seeking $110,000 (apparently the going rate for garnish-burn victims) for the “physical and mental pain” caused by a pickle that fell from her burger and onto her chin.

Veronica’s husband, Darrin, is also suing—for $15,000—because he says, ever since the accident, he has “been deprived of the services and consortium of his wife.”

Now, I’m going to sidestep the whole hot-pickle-leads-to-lack-of-consortium thing, and just issue a hearty “thanks” to the Martins for bringing this safety issue to light for all Americans.

That said, I’ll leave you now.

All of this talk of food is making me hungry.

(Ned is a syndicated columnist for News Media Corporation. Write to him at nhickson@thesiuslawnews.com or at Siuslaw News, P.O. Box 10, Florence, Ore. 97439)