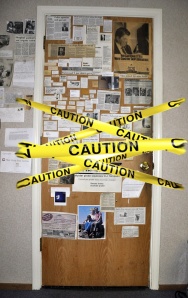 The Door, a sentinel of journalistic milestones and witness to the occasional kidney stone, is closed pending any new developments, i.e. screw-ups..

It’s been almost a year since I opened The Door (of Shame, Blame and Brilliance) in our newsroom to readers, and together we have shared 38 pieces of newspaper faux pas that Siuslaw News reporters have pasted, taped and otherwise adhered to The Door by any means possible since the 1970s. In that time, we have witnessed inventive photo cutlines such as “Shoppers shopping at shops” and entirely too many references to “probes and probing.” We’ve been informed of the obvious, such as how “wearing more clothing can help keep you warmer,” and how easily one wrong letter can lead to senior citizens “crapping themselves in a blanket.”

It’s no wonder The Door has become a journalistic Mecca, capturing the attention of well-known reporters like Barbara Walters (“The Door offers a pureness to journalism I haven’t seen since Anderson Cooper’s booty”), Morley Safer (“Do people still use ditto machines?”), Keith Morrison (“No one knows what seeeeecrets hide behind The Dooooor, especially if someone has flushhhhed”), Geraldo Rivera (“My sources have confirmed Al Capone once used The Door.”), and Anderson Cooper (“Unless it’s a closet door, I’m not interested — and can someone please tell Barbara Walters to stop looking at my butt?”)

Starting today, however, The Door will be on stand-by, maintaining its dual role as sentinel of journalistic history and guardian of commode users. It will patiently await its next entry, whether it be newspaper clipping or IBS sufferer. In the first case, you will be informed immediately of any new developments; in the second case, it’s highly doubtful.

The Box, home to 30 years of unidentified and unclaimed photos submitted to Siuslaw News, usually while attached to a rock.

While this means the end of regular Tuesday posts from The Door, it marks the beginning of a new feature I literally stumbled upon this morning while simultaneously walking and pouring low-fat creamer into my coffee. This new feature, which I initially called “The @#$% Box That Nearly Broke My @#$%& Ankle!” has been shortened to The Box, which contains unidentified photos from the 70s, 80s and 90s that are unclaimed — probably for good reason. What I find in The Box each week will be as much a surprise to me as it is to you…

Since none of these photos contain any information whatsoever, I will utilize my years of journalistic investigation experience to provide the context and circumstances captured within these historic images. This will be accomplished by interviewing members of the community, using our 1980s computer technology to its fullest, digging through our vast newspaper archive and, if necessary, just guessing.

Results from my investigation: Tipped off by the design of the Trivial Pursuit game on the table, I determined this photo was taken in the late 1990s. This led me to our archives, where I found the story of a local woman (center) who went berserk one afternoon while playing Trivial Pursuit with friends, reportedly yelling “You guys said you’d help me solve my damned RUBIK’S CUBE! Instead, you’re drinking all my Dr. Pepper!” According to the article, there were no serious injuries, except for someone walking into a hanging plant, and a lot of hurt feelings.

As we say here at Siuslaw News:

Whoa! Someone close The Door and open a window!