RELEASE THE SQUIRREL!
That’s right! It’s Tuesday, which means it’s not only a deadline day here in our newsroom, but also the day I quietly dump the contents of The Box — a collection of unclaimed photos dating back to the 1980s — onto the floor and randomly pick an image with the help of a wild, blindfolded squirrel. The photo closest to the person in the room who screams or gets bitten (quite possibly both) first is chosen! Given that last week was our first edition of this exciting new feature, I still maintained the element of surprise this morning, thanks to my stealthiness and what a fellow journalist called my, “gall to pull the same stunt that sent an intern screaming all the way to her guidance councilor.”

“HEY!” I offered in my defense, then drew a blank.

This week’s photo called upon me to utilize my extensive journalistic sleuthing skills like never before, not counting last week. As with all photos in The Box, this one contained no information as to the identity of the individual or the circumstances surrounding it. My only clue was that it was inside an small envelope with the word “suspicious” written on it. 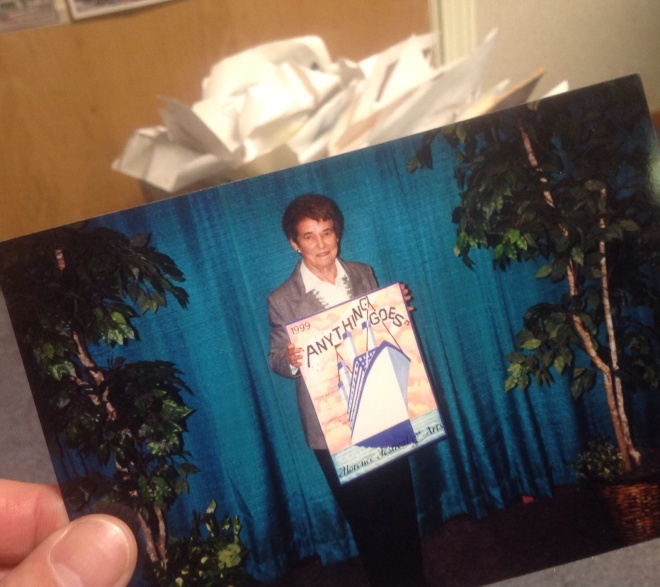 Naturally, the first step in my investigation was to determine a time frame. For obvious reasons, this was easy. Once I identified the type of artificial plants that are in the photo, then tracked down the manufacturer, it was simply a matter of narrowing down the year in which that particular style of plastic plant was made, which I did by driving to Hoboken, N.J. and sifting through hundreds of order catalogues. I eventually determined the photo was taken in 1999. This was confirmed by the date in the top left corner of the sign she is holding, which I noticed shortly after my return from Hoboken.

Armed with the year of our photo, I entered our newspaper’s “morgue.” This is where, as I mentioned last week, we keep issues of Siuslaw News dating back to 1870 which, to answer one follower’s question, was actually several years before I started working here.

It wasn’t long before an ugly truth began to surface about our quiet little town, and a cover-up involving what I believe was a short-lived senior citizen prostitution ring.


While I could find no direct evidence supporting my theory, I find it oddly coincidental that our local Senior Center held dozens of “bingo nights” followed by “pancake breakfasts” the same year it re-modeled the badminton court and bought all new shuttlecocks.

As expected, when I called the center I was told “no one from 1999 was available for comment” because they were “no longer with us.”

How convenient. Rest assured I will find out where they went…