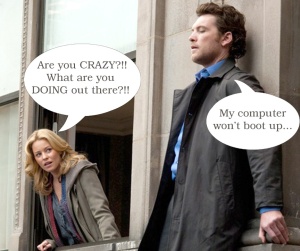 Sometime between yesterday afternoon and this morning, my computer slipped from its normal “sleep mode” and into a deep coma. This became apparent after hitting the space bar and getting no reaction whatsoever, not counting a low-pitched whirring sound that — if I didn’t know better — I could swear was snoring.

Realizing there might be a serious problem, I gathered all of my computer troubleshooting experience and, over the course of the next 10 minutes, applied that experience by hitting the space bar no less than 400 times. When that didn’t work, I unplugged the computer and plugged it back in. Tried a different outlet. Switched keyboards. Wiggled my mouse. Considered finding a different occupation, preferably one involving explosives.

I eventually realized the only thing left to do was call the “Help Line” listed in the service manual and hope someone there could either a) talk me through this or b) talk me down should our conversation move to the rooftop.

As expected, I was greeted by an automated voice telling me, in that creepy robot word-splice tone, that my call was important to “them” and to please hold until the next representative became available, shortly after his larynx has been cyber-genetically fitted for a new generation of artificially intelligent beings slowly taking over the earth.

Next came the music, a collection of Michael Bolton, Celine Dion, and Whitney Houston standards re-mixed — I’m guessing — by either John Tesh or Yanni to keep people stuck on hold from growing impatient. This is a little like trying to talk a suicidal jumper off of a ledge by giving him a pogo stick. Making matters worse, I was reminded every 30 seconds by that same creepy robot voice that my call was very important to “them” and to remain holding for the next available representative, but to keep in mind that my weak, carbon-based body was slowly deteriorating with each passing minute.

When my service representative, “Chaz,” broke the line 20 minutes later asking for my computer’s serial number, I was unprepared. Not just because it was the first unsynthesized human voice I’d heard in nearly an hour, but also because I didn’t have the serial number ready. That’s when I was told I could easily find the number by going to my computer and — very carefully — turning it upside down. Upon hearing these helpful instructions I cocked my head to one side and, while pinning the phone against my shoulder, fought off an aneurism. I was then instructed to call back when I had the serial number readily available, to which I replied I was “readily available” to catch a flight to Atlanta and strangle him with a USB cord unless he waited for me to flip my computer over and read him the number.

After entering the serial number into his data bank, he informed me all the hardware was still under warranty. However, I needed to pay $45 in order for the service call to continue. I thanked him for his time and, before hanging up, told him how much I was looking forward to having a glass of sweet tea once I arrived in Atlanta with my USB cord.

My next move was to take my computer to an approved repair service located 60 miles away. The up side is that I could deal with real humans. The down side is that driving there would cost about as much as following up on my threat of actually flying to Atlanta. After careful consideration I decided to stay in Oregon. That’s because, the way my luck was going, “Chaz” was probably a 260-lb Martial Arts champion whose passion for the sport began when his wife left him for a loud-mouthed humor columnist. Even if I got my computer fixed, what good would it do if I had to type everything with my tongue?

So, as of today, my computer is still in the shop. According to the repair guy they’re just waiting for a new “logic board” to arrive which, well…

In the meantime, I’ll continue working on a back-up computer that is too old to handle things like getting on the Internet in less than 10 minutes or multi-tasking any functions, such as simultaneously opening a document and remaining on. I hope to have my computer back in a few days. Until then?

(Ned Hickson is a syndicated columnist with News Media Corporation. His first book, Humor at the Speed of Life, will be released this December from Port Hole Publications. Contact Ned at nhickson@thesiuslawnews.com, or at Siuslaw News, P.O. Box 10, Florence, Ore. 97439)