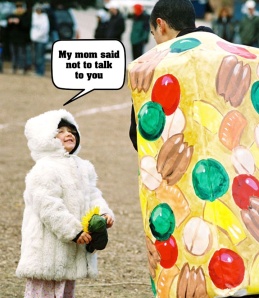 Journalism can be a dangerous profession, even for those of us who never actually leave our desk unless a “situation” develops, such as the sudden and unprovoked arrival of free donuts. On several occasions, I have found myself in harm’s way as a dozen employees stampeded into the break room (which, according to the Fire Marshal, has a “maximum occupancy level of two, as long as no one is using the commode.”) It is at those times, while being crushed between fellow employees grappling for the last maple bar, that I am reminded of just how dangerous my job can be.

But it doesn’t end there.

As you may remember (and judging by the number of fruitcakes that have been appearing on my desk, at my home or through the window of my car, many of you do), it was last year around this time that I drew the wrath of fruitcake lovers everywhere after suggesting that untold numbers of people (source: Fox News) suffer from Fruitcake Disposal Anxiety Disorder.

To refresh your memory, FDAD occurs when the recipient of said fruitcake has feelings of anxiety over how to dispose of their gift in a way that is (a) respectful, without (b) inadvertently raising the terrorist threat level. I say this because, unlike its English counterpart, which is said to be moist and delicious, American fruitcake is known — like many U.S. food products — for its durability. This is especially true of commercially produced fruitcakes, which are primarily used to keep decorative tins from getting bent during shipping.

My flagrant disregard for fruitcake rubbed a lot of people the wrong way. Particularly those who were already on edge after waking up from the holidays in a rum-induced fog. I was besieged with emails and letters from readers like Lesley Hatcher of Panama City, Fla., and Dale and Yvonne Pretzer of Florence, Ore., who promised to change my mind about fruitcake by sending me homemade samples this year.

I had no reason to suspect this would actually happen, and that I would receive enough fruitcake to finish the retaining wall in my back yard. If I had, I would’ve also flagrantly disregarded beef tenderloin and Fireball cinnamon whiskey.

But a promise is a promise. I said I would sample everything with an open mind and, in the event of a sudden fruitcake epiphany, seek immediate medical attention. After which, I would issue a formal apology to the fruitcake lovers of the world.

Just as soon as doctors had me stabilized.

Due to the volume of fruitcake I have been consuming, this process has taken longer than expected since I’ve spent most of the last few weeks hung over and picking candied fruit from my teeth. However, I’m willing to admit I may have overstated things when I called fruitcake a “threat to humanity.” The same goes for what I said about launching fruitcakes into space as a defense against alien invaders.

The truth is, I may have to renounce my title as “Ned Hickson: The Fruitcake Grinch,” as given to me by the Pretzers. I’m not saying I’ll be joining the Society for the Preservation of Fruitcake any time soon. Only that I’d be willing to put myself in harm’s way should we experience an unprovoked fruitcake attack again next year.

Which brings us to our next topic: My flagrant disregard for live-shipped Maine lobster…