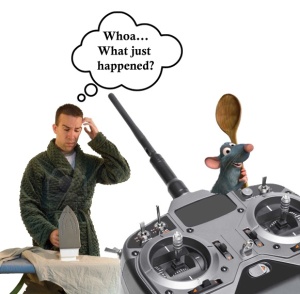 As I’ve mentioned before, because of our home’s proximity to the local wharf, from time to time we have a problem with rodents. Now, when I say “rodents,” I mean rats, and when I say “problem,” I mean finding mysterious entries scrawled on our grocery list that read:

However, I know that we aren’t alone in this, and that our neighbors undoubtedly have the same rodent problem. I know this because 1) They are our neighbors, and therefore live as close to the wharf as we do, and 2) Because we routinely lob assorted cheese curds into their yards before going to bed.

That said, some recent discoveries could change the way we go about solving our rat problem. According to a recent article in the journal Nature, researchers at the State University of New York have created the world’s first living remote-controlled rat. By implanting tiny electrodes in rats’ brains, scientists can command the rats to turn left or right, climb trees, navigate mazes, and, in some cases, stage dramatic light saber duels while dressed as tiny Star Wars characters.

The science involves three electrodes, implanted at specific locations in the brain, which are then triggered by a remote device which produces controlled responses in the rat.
Interestingly enough, this very same technology is utilized by many wives, who use the TV remote to trigger controlled responses from husbands by switching the channel whenever they get up to use the bathroom.

Understandably, there are those who think that manipulating rats (or husbands) is inhumane, and that it is only the first step toward an “Orwellian” world of human-control technology. While this is certainly possible, others argue that we can’t dismiss the many practical applications that Robo-rats offer. For example, Professor Howard Eichenbaum of Boston University says the research “holds the promise of using animals as couriers to reach trapped victims.”

I don’t know about you, but when trapped beneath a crumbled overpass, I can honestly say a rat is just about the LAST thing I want coming in after me (not counting Geraldo Rivera.)

Don’t get me wrong. I’m not saying that Robo-rats don’t have their place. It just doesn’t happen to be anywhere near ME.

But at my neighbors’ is fine.

To be honest, it wouldn’t exactly come as a shock. Especially with all of that cheese they’ve got lying around.