Hey, it’s Friday! What? Still not good enough? What if I also told you it’s time for Ned’s Nickel’s Worth on Writing! Okay fine. But it’s still Friday and you should be happy. I know I am. Especially after Publisher’s Weekly recently called my Nickel’s Worth “…writing tips that are worth every penny, unless you factor in the cost of inflation.” So we obviously both have a lot to be thankful for today. However, before we get to this week’s NWOW, I’d like to point out how the image accompanying this post is…

Thank you. As I was saying, the image is one I’m sure many of you remember — some in amazing detail. Although my wife still isn’t completely convinced, I’d like to clarify those are not my actual cheeks. Sorry. But as a journalist, I felt the need to explain that in the interest of full disclosure. And the image for THAT post will remain somewhere on my wife’s iPod. Just like the image above, this post — which is about the importance of manuscript revision — is probably one you remember.

Okay, just the cheeks then.

I still feel a need to explain why I’m re-running a post from last year instead of something new, the reasons for which are a mixed blessing. And by that I don’t mean there is a priest standing behind me with his hand raised saying, “Um, I’m still not sure about this, Ned. Let’s talk about your mid-20s again…”

I say mixed blessing because I’m fortunate to be the guest blogger on two sites over the next few days, including as a guest of Erica’s at the multifaceted, multi-Freshly Pressed Thoughts of a Lunatic tomorrow, and at the truly hilarious Long Awkward Pause this Wednesday (Jan. 22). In addition, I also have upcoming interviews at Suzy Jones’ terrific writing blog It Goes On and as a guest of talented journalist/author Alan King.

What I’m trying to say, after the longest introduction to a re-post in the history of blogging, is that your choice to stop in here, read and often share your thoughts isn’t something I take lightly. In short: I’m asking for your understanding and forgiveness this week. 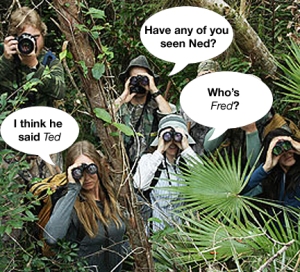 Whether writing a 500-word column or 400-paged manuscript, there comes that satisfying moment when you hit the final keystroke. The sound echoes, in slow motion, reverberating through your body and outward, catching anyone within a three-mile radius in its ripple effect.

Outside your window, traffic comes to a stop. Drivers and pedestrians join together, taking time from their day to cheer, applauding so loud and hard their hands turn pink.

And wait — is that a tear I see glistening in the eye of the Fed-Ex driver?

But who can blame them?

Your own brilliance is looking back at you from the monitor! How clever you are!

Especially that line about how being a parent is like training donkeys, and there are thymes when your children just need a swift kick in the asss…

This brings us to the next moment following that final keystroke, when the applause subsides, and you suddenly notice that the cleverness looking back at you from your screen is spelled “cleaverness.”

Is that a draft you feel on your exposed backside?

And, depending on the size of your manuscript and how much time you have — and whether you’ve gotten up and closed the window — it should only be the first of three drafts you’ll need to complete before submitting your piece for publication.

Which isn’t to say you can’t do more than three. In fact, when it comes to book manuscripts, expect at least three drafts before you can, once and for all, be asked to change your story from third-person to first-person in order to add a sense of immediacy.

At which point you will, with total immediacy, seriously consider a job in public sanitation.

But let’s suppose the head of public works tells you, in no uncertain terms, that things are backed up in the sanitation department. And let’s suppose you manage to keep a straight face long enough to return to your computer and continue pursuing a writing career, even though you can’t shake the feeling that you are now on a “watch list” for suspicious flushers.

Then it’s time to start the next draft of your manuscript.

As I’ve mentioned before, in addition to being a columnist, I’m also a firefighter. When you get down to it, putting out a structure fire is also a three-draft process:

I’ve adopted these firefighting terms for the three phases of my writing and editing routine. Not only because I think they accurately describe each phase, but also because they sound way cooler than:

See what I mean?

The Initial Attack phase is exactly what it sounds like. You have assembled what you need, know your plan of action, and are on-scene with your nozzle wide open, flooding the page with your ideas in a steady stream without interruption.

Except now I have to use the rest room…

The Initial Attack is when you don’t worry about spelling, punctuation or other grammatical concerns that will slow down your progress in getting thoughts and ideas on the page.

The Initial Attack is what writers — and firefighters — live for.

Next comes the not-so-fun, but equally important, phase of the draft process: Overhaul.

This is when you take a deep breath and look around to see what the fire has done, what dangers remain, and take care of anything that could flare up again later.

As a writer, the same rules apply. Take a look at your pages as if they’re rooms in a house. And if your house has 400 rooms, the IRS is looking forward to your manuscript.

Go through each page, line by line, and look for obvious errors — typos, misspelling, run-on sentences, improper tense changes, etc. As you do, keep a red pen handy to write notes as you go. I often get additional ideas, or think of better phrasing, as I go through this process. Write them down and refer to them by page and paragraph so, when you go back, you can refer to them easily.

Once you’ve made your grammar corrections and implemented your revisions, take a break and clear your head.

On a fire scene, it’s easy to get tunnel vision after a while. Especially if you’re extinguishing a car fire inside an actual tunnel.

The same thing can happen during the draft process as a writer. So give yourself 30 minutes or so to get a fresh set of eyes before beginning the final phase: Clean-up.

At this point, you’ve gone through everything twice, corrected the grammatical “dangers” you discovered during Overhaul, and have made revisions to your manuscript that improve upon the original draft.

Clean-up is that final walk-through you give before telling residents — or publishers — “Hey, everything has been done to make sure you won’t get burned.”

Read through this draft out loud. If you can arrange to have it read back to you by someone else, such as Ben Kingsley, even better. Hearing your words read by someone else can reveal awkward phrasing your mind skips over because IT knows what you’re trying to say; someone else may not.

Regardless, read through it twice: once aloud and once to yourself. If you don’t find any “hot” spots, it’s time to clear the scene and secure your manuscript for publication.

If not, another draft may be in order.

Lastly, If you get frustrated and try flushing your manuscript down the commode, remember:

Someone from public sanitation is probably watching.

Next Week: Your questions, my answers — and probably at least one potential lawsuit.

30 thoughts on “Do you feel a draft? It’s time to revise your manuscript”