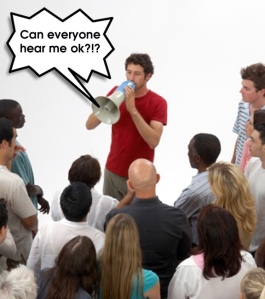 There it is again! Did you hear it that time? All the whistling and excited hollering? That’s the sound of people who have just realized it’s Friday! Now, keep listening as I remind them that, in addition to being the end of the work week, it’s also time for Ned’s Nickel’s Worth on Writing!

See what I mean? Obviously, everyone is busy getting online! For those who might be visiting for the first time, I should explain that my Nickel’s Worth is when I open myself like an oyster and share pearls of writing wisdom gained from 15 years as a shucking columnist. It’s a weekly feature that has been called “…insightful,” “…thought provoking,” “…life changing,” and “…Suspected in several cases of food-borne illness.”

But enough with the accolades!

This week’s post is going to be different from regular NWOWs. That’s because it’s actually a clarification to last week’s Nickel’s Worth which, as some of you may remember, depending on your age, and the number of children in your home, was about… Uh…

Where was I going with this?

Oh right! Recognizing and fixing Passive Voice in your writing. In the previous post, I used Jedi Master Yoda as an example because of his constant placement of verbs before the subject, such as:

“Getting stronger in you the Force is.”
“Sensing the Dark Side in him I am.”
“Write poor dialogue George Lucas does.”

Though putting a verb before the subject can be an indicator of Passive Voice, it’s not the only indicator and a potentially misleading oversimplification. Because I’m a firm believer in taking responsibility squarely on the shoulders, I have no one to blame for this but Yoda. Sure, I may have played a small part, but hey:

Mostly Yoda it was.

Regardless of whose fault it was, I DO know I’d like to thank Ross Murray at Drinking Tips for Teens for offering further clarification from Canada where, as we all know, Soduku isn’t nearly as popular as diagraming sentences. I should mention that Ross has an extensive background in education, and not just as a teen driving instructor; he’s also a talented writer and teacher. For this reason, and because I’m almost out of the pure maple syrup he sent a few months ago, I felt it was important to include a note he sent that helps clarify things a bit more. I’d like to point out that he did so with the level of class and humble demeanor you’d expect from someone trying to disassociate himself from Rob Ford and Justin Bieber.

Ross: When the object in an Active sentence becomes the subject, it’s Passive Voice.
Me: Aren’t you from Quebec or something? Do you even speak English?
Ross: I’m just saying the sentence “I hit the ball” would be Active, and “The ball was hit by me” would be Passive.
Me: Does Toronto even have a baseball team anymore?
Ross: Yes. But I think you’re missing the point. I’m saying…
Me: Americans are fat. That’s what you’re saying. And that if we were more active we wouldn’t be so overweight as a country, right?
Ross: That’s not what I’m saying at all.
Me: It sure sounds like that’s what you’re saying. And I’m not fat, by the way.
Ross: I never said that. I’m just trying to explain that if a form of “to be,” such as the word “was” in “The ball was hit by me,” occurs before the verb, which in this case would be “hit,” then it’s probably a Passive sentence.
Me: Got it, Ross. Your point was taken by me.
Ross: Right. Well, may the Force be with you.

In all seriousness, I really do want to thank Ross for offering his insight and clarification on Passive Voice:

When the object in an active sentence becomes the subject

For example:
Active: I take your point.
Passive: Your point was taken by me.
Actively Passive: I don’t care as long as I can have more maple syrup at some point.

Next week, we’ll address a topic sent in by Michelle at MamaMickTerry, who asked if publishers really give a Tweet about your social media presence.