Apparently, today is National Pet Day. No one told me this. Not even our dog, who is always the first to point out important holidays such as “Arbor Day,” “Bring Your Dog To Work Day,” “National Hydrant Awareness Day” and “Bathe Your Cat Day” (which I think he made up.) Nonetheless, we love our chocolate Labrador, Stanley, and his two adopted siblings, CJ and Hazel. To celebrate, I’d like to offer this post from the past in tribute to Stanley and all the pets who make our lives so much richer, not counting what we spend on home repair… 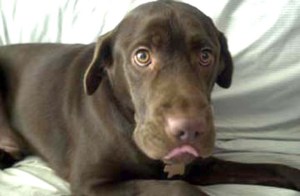 This is the face of rising homeowner’s insurance.

Each year, we gather as a family to have our pets blessed on St. Francis Day. We do this because we want to give our pets every advantage, particularly if there’s a chance — through divine intervention — that our Chocolate Labrador’s IQ could be raised above that of a standard carrot. I know this is supposed to be a general blessing situation, but I think God would agree there was a serious oversight during Stanley’s creation process.

I know He is very busy.

I know He sees all.

But maybe He was also trying to catch the season finale of “Hell’s Kitchen.”

Whatever the reason, somewhere in the world there’s a dog with two brains. Undoubtedly, its owners are very happy. They don’t care that their dog’s enormous cranium causes people and other dogs to stare. That’s because their dog is smart. Their dog has an instinctive understanding of things like gravity. These owners give thanks to St. Francis each day because their dog, in spite of its bulbous cranium, would never high-center itself on a coffee table in front of company.

Stanley’s problem is that he tries to move like a gazelle when, in fact, he has the dexterity of a bull moose. He may THINK he can leap over the back of the couch from a seated position, but repeated attempts have proven otherwise. I’ve given up trying to explain this to people; I simply tell them he must be choking on something and trying to give himself the Heimlich maneuver. It’s less embarrassing than the truth, which, more often than not, prompts people to react as if their very life depended on not upsetting the lunatic dog before Animal Control arrives. However, Stanley does come in handy when trying to get rid of pushy sales people. All I have to do is open the door wide enough for them to glimpse a 60-pound dog repeatedly leaping chest-first onto the couch and then falling to the floor. On the rare occasion a sales person makes it through their entire spiel, I’ve yet to have one come inside even when invited.

I should mention that Stanley is more than a year old. The fact he is still doing things like this concerns me. So much so that I began looking for a treatment. After hours of research and a lengthy discussion with my vet, we reached a disturbing prognosis for Stanley:

There is no treatment.

At least, not for him.

But I did find out that Stanley is not alone. According to a study conducted by Tesco Pet Insurance in England, Chocolate Labs are officially the clumsiest breed of dog on the planet. Tesco’s study showed that Labs are twice as likely to hurt themselves while attempting something that researchers agreed, “Requires a crash helmet.” In addition, 55 percent of Chocolate Lab owners filed a claim in the last year for damages to their home under the category “Act of Dog.”

Unfortunately, this behavior is present in Labradors here in the U.S. as well. One example is a three-month-old Lab puppy in Oklahoma who recently blew the roof off his owner’s house. As it turns out, “Jake” was fine and the family had left for the day. Firefighters speculate that the dog had chewed a hole in the gas line when a nearby water heater clicked on, causing a blast powerful enough to level the house.

This incident really put things into perspective for me. Come next year, when we gather our pets for St. Francis Day, I’ll just pray for Stanley’s continued good health and happiness.

That’s assuming we still have a roof over our heads.

Ned Hickson is a syndicated columnist with News Media Corporation. His first book, Humor at the Speed of Life, is available from Port Hole Publications, Amazon.com or Barnes & Noble.

46 thoughts on “Home insurance premium up? Thank my clumsy dog”