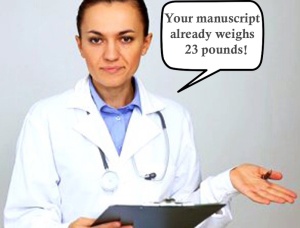 Though I’m still working on the eBook version of my Nickel’s Worth on Writing, that doesn’t mean I’ll be using it as an excuse to stop posting my weekly NWOW. No way! I’ll use a fictitious illness for that. Speaking of fictitious, this weekly feature was recently recognized by Publisher’s Weekly as offering “A level of writing insightfulness rarely seen outside of [writing] institutions…”

Let’s face it, editing the second draft of your story or manuscript is like a visit to the proctologist: You want it to go quickly; you want to avoid too much grimacing; and you know before you get started there’s going to be too much crammed in. Yet statistics show that early detection of grammatical “polyps” is the most effective way to prevent the spread of bad writing.

However, I don’t think it’s a coincidence that if you remove the “p” and “l” from the word “polyp,” then add a “t,” you can spell the word “typos.” Or if you prefer, drop the “y” and you can spell “stop,” which I plan to do right now because, judging from the look on your faces, I’ve made my point.

Or possibly made you queasy.

Either way, I believe the second draft is the most important draft in the “three-draft process” I suggest every writer practice. And when I say “three-draft” process, I’m not talking about how many beers it takes to loosen up those typing fingers. I’m talking about the minimum number of drafts you should make of your story or manuscript before you push the “publish” or email button. That said, I’m not suggesting you can’t do more than three if that’s what it takes to make your manuscript the best it can be. But if you’re on the 20th draft of a five-paged short story you’ve been revising for the last three years, it’s time to ask yourself if 1) There’s alcohol involved, or 2) You’re purposely stalling.

I recently had a conversation with a blogger who is an aspiring writer. She confessed to having a 100-paged “work in progress” she’s been revising on a weekly basis for six years. Her plan is to make it available online as a self-published novella. When asked when she thought it would be done, she wasn’t sure.

“I think it’s time to consider forced labor,” I told her. “This baby is so overdue that, if it were a child, it would come out eating solid foods.”

[Official Disclaimer: I am not an actual doctor, although I have played one. Just not on TV.]

Inevitably, she realized she was stalling out of fear of failure; as long as her novella remained unpublished — and unread — the hope it would be a “big success” remained. As I mentioned last week, “success” is a relative term. What I mean by that is, if your family won’t even read it, then Yes: it probably stinks.

Ha! Ha! Just kidding! Who cares what your family thinks! Or if your own mom thinks your writing is “just a phase” that will pass like “that Star Wars thing” once you turn 50 in couple of years!

By the way, have you seen my shoes? 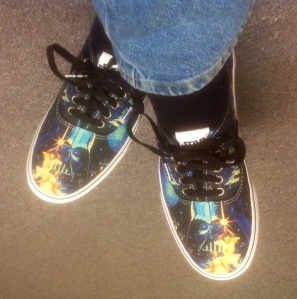 Yeah, Star Wars and being a writer are just phases…

In all seriousness, the only failed writing project is the one that is never started. If you’ve completed one or more drafts of your manuscript then you’re already a success because you’ve beaten the odds by doing something many people talk about but never attempt — let alone finish. Think of it as making the world’s best submarine sandwich; whether or not anyone takes a bite, it’s still a great sandwich. Having others walk around with mustard stains on their shirts is just a bonus.

So if you’re carrying around a 9-pound, fully-developed manuscript, ask yourself what you’re truly waiting for and why. Be honest with your answer. Don’t let fear of failure keep your literary baby from entering the world. It may be time to start pushing for a delivery.

And be thankful I didn’t end this with another proctology comparison.

37 thoughts on “Is your manuscript in its eighth trimester? It may be time to induce”