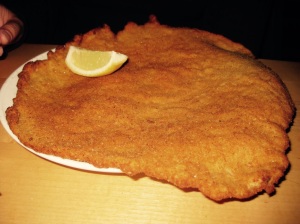 I won’t graze before my meal,
I refuse to overeat, doggone it;
I swear to stop feeding my face
at some point before I vomit.

I had repeated this mantra to myself in preparation for the Christmas holiday meal, hoping to curb my normal routine of eating so much that I’m forced to change my breathing pattern to something that sounds like a cheetah in heat.

In the past, I’ve simply given in and accepted my fate, preparing for it by wearing one of those long sweaters which hides the fact that, once my pants are unbuttoned, the only thing holding them up is a small strip of packaging tape on each hip — a technique which allows my new center of gravity to shift, and therefore keep me from toppling into the gravy boat when leaning across the dinner table.

It was while standing in line at the hardware store with a roll of double-sided, maximum-hold packaging tape that I had an epiphany — a life-changing moment sparked by two important realizations:

• First, I was setting myself up for failure by purchasing the tape.
And second,
• I’d forgotten my wallet at home.

With a new-found strength derived from a sudden lack of buying power, I stepped from the checkout line and marched past a stream of other would-be tape purchasers who, upon seeing me return my roll to the shelf, began applauding wildly. Suddenly, others were leaving the checkout line to join in the revelry as, one by one, each of them took a turn emerging empty-handed from the tape aisle amid exuberant cheers! Before I knew it, I was being hoisted skyward as music broke out and the Dallas Cowboy cheerleaders surrounded us, shaking their pompoms and chanting “Ned! Ned! Ned!”

Okay, fine. So that didn’t really happen. But I really did forget my wallet, the result of which left me tapeless coming into Christmas dinner.

The first round went fine. I paced myself by using imagery (my body as a pan of Jiffy Pop popcorn over an open flame) as a way to keep things under control.

Round two didn’t go as well as the first, but I still fit into my pants.

Round three wasn’t so great. Even though I was still using imagery (the Jiffy Pop bag was now exploding into a shower of black, flaming popcorn that had caught a pot holder on fire) it didn’t stop me from attempting round four.

By round five, I had given up on the whole imagery idea (by now, there was nothing left but charred tin and an arson investigator, anyway) and once again accepted my Christmas dinner fate.

Which isn’t to say things were a total loss. When we went to the movies yesterday, I had no trouble skipping the popcorn…