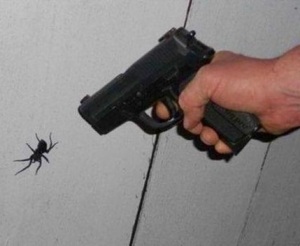 For the last two nights, my youngest daughter has come running down the stairs about 10 minutes after going to bed. The reason? A big, hairy black spider she said is roughly the size of a Chihuahua. Being a dutiful father, I immediately rushed upstairs the first night and, to my utter horror, walked in to discover…

“It was on the ceiling just looking at me,” swore my daughter.

The next night, she called from upstairs so she could keep an eye on it. As I came to the door, the spider apparently dropped down the wall and behind her dresser. With my daughter standing behind me, I yanked the dresser away from the wall and shrieked in terror when, AT LAST, I laid my eyes upon…

I put my arm around her shoulder and reasured her as best I could. “Don’t assign it a gender, Honey,” I said. “It’s only going to make it more angry if you’re wrong.”

So as we enter into our third night in this twisted game of psychological warefare, I make the following promise to you, Mr. Arachnid…

37 thoughts on “Vengeance will by mine, Mr. Hairy Spider…”