For three days each year, our little coastal town of 7,000 welcomes about 500 bikers and another 15,000 visitors to get crazy and celebrate… A flower.

A rhododendron, to be exact.

No one knows why.

But it’s been going on for 108 years and, for those three days, our town becomes an unlikely concotion of flower enthusiasts, Free Souls bikers and tourists all co-mingling over beers aand bacon-wrapped hot dogs. Think of it as “Sturgis meets Mardi Gras,” with a little Rose Festival thrown in. Personally, I think the bacon-wrapped hot dog is reason enough to celebrate, so I’m not going to suggest ending the festival anytime soon.

If you read Friday’s post, you know the festival kicks off with the arrival of the carnival — something that is always a bitter-sweet reminder of the loss of my best friend to cancer several years ago. As much as the festival reminds me of that loss, I also remember how much Jason loved this weekend each year, and some of the crazy things we did. Usually after a few beers.

Like when we dressed up as bikers and hung out with them at The Beachcomber.

We made some good friends that night even though we looked like a couple of rejected extras from “The Wild Bunch.”

Like Jason, who also worked here in the newsroom before I stumbled in 16 years ago, I’m always assigned to photograph the parade route along Bay Street. This is where the bikers congregate, lining their Harleys along both sides for several blocks. I’ve had nightmares about tripping over a chopper tire and sending a row crashing like dominoes, and then being invited to the Olympics after setting a new sprint record.

The truth is, it’s my favorite assignment. I look forward to it each year because I enjoy talking with the bikers; the challenge of trying to capture the unique moments that constantly present themselves; and for a little while at least, sharing Rhody Days with my friend while walking in his footsteps.

I’d like to share this year’s footsteps with you. I’d also like to illustrate that, despite what happened in Waco, bikers are like any other group: Whether it be police, ethnic group or religious affiliation, they are at the mercy of the stereotypes pepetuated by a relative few… 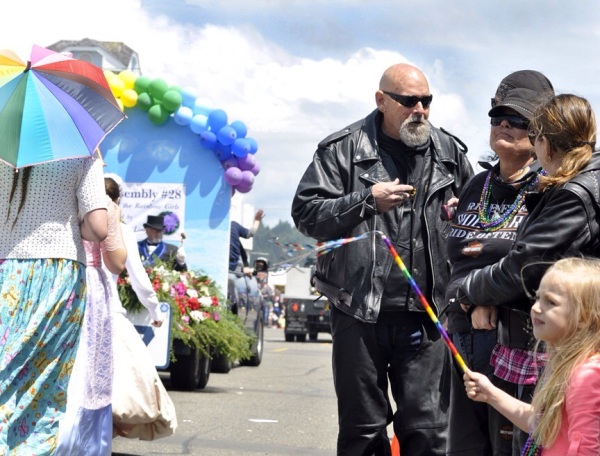 It isn’t often that you get to see rainbows and leather together. Not even in “50 Shades.” 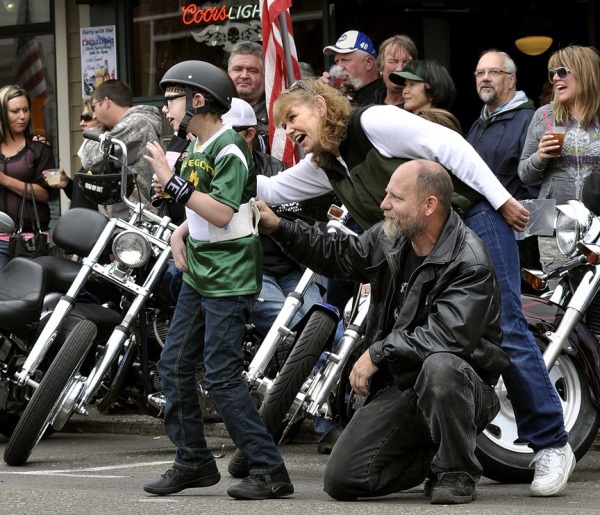 Probably my favorite moment this year, this young man was lovingly monitored by different members of the group throughout the parade. 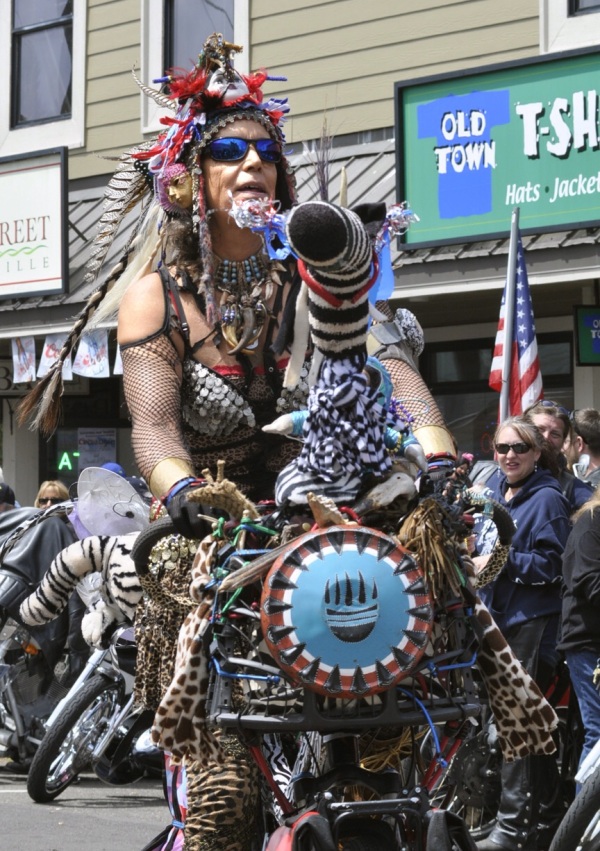 This person lives here in Florence and rides his bike everywhere dressed like this, and not just for Rhody Days. He received applause on Bay Street, where he hung out for the remainder of the parade

Gayle is one of the owners of The Beachcomber, the bikers’ favorite hangout on Bay Street. She is also in charge of the children’s programs at the library. Yeah, she’s pretty diverse

The biggest applause? It came when local soldiers came though

Caught this on a passing truck. I’m sure the mud flaps are already in production, ladies

As I mentioned, the carnival is bitter-sweet for me. Here’s the sweet side

I’m going to end with a photo that means a lot to me because it includes my friend and first editor, Bob Serra, who hired me here at Siuslaw News 16 years ago. And before that, he hired Jason. Clearly he’s got great instincts at least 50 percent of the time. He’s moved on now, and even though it’s a small town we don’t get together nearly as often as I’d like. The Rhody Parade is one time each year I know I will get to see him, shake his hand and laugh together. He took a chance on hiring me all those years ago and I’ll always be grateful.

Except on deadline days…

I know this is well off the beaten path of my normal posts. Then again, no one has ever accused my posts of being the work of someone who is normal. Thank you for taking a walk along Bay Street with me.

Oh, I should tell you there were horses in the parade, so you might want to check your shoes…