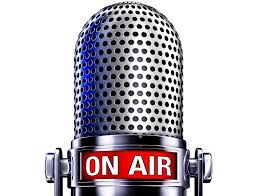 One of the advantages of being on the radio is there’s a certain amount of anonymity. You’re never going to be in the grocery store and have someone behind you say,”HEY! Didn’t I see you on the radio? What you said about fruitcake was a disgrace! I LOVE FRUITCAKE! I’m heading to the express line so I can meet you in the parking lot, Mr. Funny Man!”

It’s true there’s always a chance someone could recognize your voice in the grocery store. Which is why radio personalities use a special “radio voice” on air that’s different from their normal speaking voice. For example, many people don’t known it but off the air Howard Stearn sounds a lot like Elmer Fudd.

It’s true. I once heard an off-air tape of Stearn in the studio asking for some visiting strippers to take their tops off…

Given that my guest appearance on “The San Francisco Jack” show was my first radio experience to last longer than a few minutes, I was too busy trying not to choke on my own spit or get tangled in my headphones to worry about using a “radio voice” for the hour-long interview on KXCR.

But I figured, “Hey, it’s not like anyone saw me, right?”

Part of the show was taped for a short online promo. The good news is that only my profile is visible. The bad news? My large nose makes that profile rather… distinct. So I’d like to apologize in advance to anyone who might be in line behind me at the store. I swear I’m not staring. I just don’t want to take a chance showing my profile to any fruticake lovers.

Especially if they’re in the express lane.

(Ned Hickson is a syndicated columnist with News Media Corporation and a member of the writing team at Long Awkward Pause. His first book, Humor at the Speed of Life, is available from Port Hole Publications, Amazon.com or Barnes & Noble. Disclaimer: Even if you choose Ned’s book for summer reading, you should still use sunscreen.)

29 thoughts on “How it looks being on the radio”