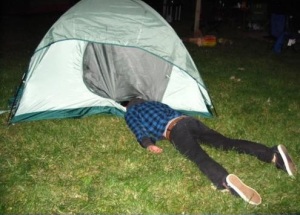 Our family loves to go camping. In fact, we make sure to get out and pitch our tent — without fail — once a year.

Traditionally, this takes place during the busy Labor Day Weekend so that as many people as possible can witness a 49-year-old man being attacked by his own tent. In my defense, I have to say our tent is very large; especially when it is laying flat on the ground.

If I hadn’t lost the step-by-step instructions that came with it, I’m sure the assembly process would be a lot easier because, as a man, I could use them to, step-by-step, blame everything on having lousy instructions.

What this means is that over the Labor Day Weekend my handiwork will again be mistaken for a hot air balloon that has crash-landed into our family’s camp site.

I bought this tent 20 years ago while living in Texas. As you know, everything is bigger there — including tents — which is why I tried to find the smallest model available. This turned out to be a tent called Quick Camp, which was a handy, two-compartment structure roughly the size of a jet hanger. Despite its size, the salesman assured us that the assembly process was very simple. He said that the entire thing could be erected in less than 20 minutes with a little planning.

And he was right.

As long as your plan includes staying out of the tent.

For some reason, it collapses on us every time we got inside. I’m not talking about an inconvenient buckling of the walls; this is more like an instantaneous implosion of water-resistant nylon that required the assistance of a search and rescue team:

“Listen up! Team ‘A’ will start at the west quadrant near the mosquito netting. Team ‘B’ will take the dogs and follow the perimeter until we can —”
Woof! Woof!
“Quick — over HERE! I think someone’s moving under this giant door flap!”

In spite of these experiences, we still feel it’s important for our family to go camping together. That’s because, as parents, we know our teenagers really hate it. I mean, sure — it’s pretty exciting while Dad is flopping around under 200 yards of nylon. But once that’s over, and I’ve decided that we’re all going to sleep out under the stars LIKE REAL PIONEERS! they begin to realize that everything they know about civilization has been left behind.

And by “everything,” I mean their electronic devices.

There is only dirt.

And if they’re lucky, enough fire to cook a marshmallow.

Eventually, as the shock of not having a television wears off, our kids enter what I feel is the most important phase of their camping experience: Realizing that we, the parents, are the key to their survival.

This epiphany starts the moment I pull out the old camp stove, give it a few pumps, then light the picnic table on fire. In that instant, the only thing that matters is reaching out together as a family and finding the nearest fire extinguisher.

So, during the Labor Day Weekend, our family will once again be camping out. If you happen to be in the neighborhood, feel free to stop by.

The rescue team could probably use your help.

(Ned Hickson is a syndicated columnist with News Media Corporation and a member of the writing team at Long Awkward Pause. His first book,Humor at the Speed of Life, is available from Port Hole Publications, Amazon.com or Barnes & Noble.)

66 thoughts on “Camping with your teenagers is like one big (search) party!”